William was the son of Louis Peets & Mary A. Trepanier aka Trippany.

Fort Covington Sun, Thursday, 31 January 1951: William N. Peets, 76, of Massena, father of Harold Peets of Fort Covington, died Sunday in an Ogdensburg hospital. He had been in failing health for two years. Funeral services were held from Sacred Heart Church, Massena, yesterday (Wednesday) morning at ten o’clock, the Very Rev. Msgr. Walter Funcke of Hogansburg officiating. The body was placed in Calvary cemetery vault, Massena, to await burial in the spring. Born in Norfolk a son of the late Louis and Angeline Mary Trippany Peets, he moved to Massena at the age of eighteen and had since resided there. He was a farmer by occupation. Surviving are his wife, the former Miss Clara Mitchell of Louisville, whom he married June 8, 1897; four sons and three daughters, Mrs. Percy Raymo, Syracuse; Floyd J. Peets, Mrs. Guy Sutton, Massena; Harold Peets, Ft. Covington; Harvey Peets, Mrs. William Fregoe and Donald Peets, Massena; a brother, Frank Peets, and two sisters, Mrs. Ernest A. Tebo and Mrs. Louise Tyo, all of Massena; 38 grandchildren and 14 great-grandchildren. A brother, Louis Peets, died last October in Brushton. Pall-bearers at the rites were William Peets of Fort Covington; Stanley Peets, Robert Sutton, Fred Peets, John Larue and Vernon Sutton, all of Massena.

Obituary: Massena Observer, Thursday, 27 June 1957: Mrs. Peets Dies at 78, Rites Set: Mrs. Clara Peets, 78, widow of William Peets and a resident Massena and Louisville most of her life, died at 1:15 Wednesday morning, June 26. 1957, at the home of a daughter, Mrs. Guy Sutton, III Stoughton Ave. She had been residing with another daughter, Mrs. Percy Reynolds, in Liverpool and Saturday came here to visit. Early Sunday morning she suffered a cerebral hemorrhage and had been in serious condition since then. She had been in failing health several months. The body is at the Phillips Memorial Home. Funeral services will be conducted at 8:30 Saturday morning in Sacred Heart Church. Burial will be in Calvary Cemetery. Mrs. Peets was born Apr. 13, 1879 in Louisville, the daughter of John and Ellen Kirkey Mitchell. She was educated there and on June 9, 1898 she and William Peets were married in Sacred Heart Church here. After their marriage Mr. And Mrs. Peets spent their entire married life in this area, Mr. Peets working as a farmer until his retirement. He died Jan. 27, 1952. Since then Mrs. Peets had resided with her daughters. Surviving are three daughters, Mrs. Percy (Myrtle) Reynolds, Liverpool; Mrs. Guy (Lillian) Sutton, Massena, and Mrs. William (Veronica) Fregoe, Madrid; four sons, Floyd, Harvey and Donald Peets of Massena and Harold Peets of Fort Covington; one brother, John Mitchell. Massena: 42 grandchildren and 34 great-grandchildren.

Myrtle Peets: Massena Observer, Tuesday, 30 March 1971: MRS. PERCY RAYMO: Mrs. Myrtle Peets Raymo, 72, died Mar. 18, 1971, in St. Anthony's Hospital, Oklahoma City, Okla., after being in failing health about a year. Funeral services were held in St. Charles Borromeo Catholic Church with burial in Resurrection Cemetery. Surviving are one son, Robert W. Raymo, 6417 N. Nicklas St., Oklahoma City, with whom she resided; four grandchildren; two sisters, Mrs. Lillian Sutton, Massena, and Mrs. Veronica Frego, Madrid; four brothers, Harold A. Peets, Fort Covington, Floyd, Harvey and Donald Peets, all of Massena. Harvey and Donalds Peets flew to Oklahoma City to attend the funeral. Mrs. Raymo was born in Massena Dec. 18, 1898, a daughter of the late William and Clara Peets. She and Percy Raymo were married in St. Patrick's Church, Hogansburg, by the Rev. Hugh O'Reilley, then pastor. Some years later they moved to Syracuse and about eight years ago they moved to Oklahoma. Mr. Raymo died there about four years ago.

Lillian E. Peets: Massena Observer, Tuesday, 13 January 1987: Funeral services for Lillian E. Sutton, 83, formerly of Stoughton Ave., Massena, were held on Monday at 10 a.m. at the St. Mary's Church, Massena, with Monsignor John Pendergast officiating. Burial will be in the Calvary Cemetery, Massena. Arrangements were with the Phillips Funeral Home. Mrs. Sutton died on Friday (Jan. 9, 1987) at 5:55 at the Highland Nursing Home, Massena; where she had been since Dec. 14, 1983. Surviving are her two daughters, Mrs. Roderick (Betty) Beaulieu and Mrs. Ray (Phyllis) Martell, both of Massena; two sons, Robert of Liverpool and Vernon of Jacksonville, Fla.; one sister, Veronica Fregoe of Massena; two brothers, Harvey Peets and Donald Peets, both of Massena; 14 grandchildren and 17 great-grandchildren. She was born on Sept. 28, 1903, in Massena, daughter of William and Clara Mitchell Peets. She married Guy Sutton on Jan. 30, 1929 at the St. Patrick's Church in Hogansburg. She was a communicant at the St. Mary's Church.

Is William Napoleon your ancestor? Please don't go away!

ask our community of genealogists a question.
Sponsored Search by Ancestry.com
DNA Connections
It may be possible to confirm family relationships with William Napoleon by comparing test results with other carriers of his Y-chromosome or his mother's mitochondrial DNA. However, there are no known yDNA or mtDNA test-takers in his direct paternal or maternal line. It is likely that these autosomal DNA test-takers will share some percentage of DNA with William Napoleon: 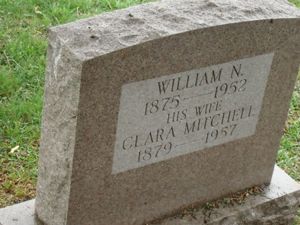