Facts and Fallacies, Thursday, 18 October 1951: Louis P. Peets, prominent local business man, died Wednesday morning, October 10th, at the Alice Hyde Hospital in Malone after an illness of only two days. Mr. Peets was born 71 years ago in Iowa, a son of the late Louis and Mary Peets. He had been actively engaged in the mercantile business for 38 years and owned and operated several farms in the vicinity. For 35 years he was justice of the peace and was also mayor of Brushton for several years. He was supervisor of the Town of Moira in 1944. He was a devout member of St. Mary’s Roman Catholic Church. Mr. Peets is survived by his wife, the former Mae Tebo; one son, Adelbert of Brushton; three daughters, Loretta and Madeline of Brushton and Mrs. William (Mae) Boyle of Ft. Covington; five grandsons, William, Rochard, Donald and Jack Boyle and J. Francis Peets; two sisters, Mrs. Ernest Tebo and Mrs. Louise Tyo, both of Massena and one brother, Frank of Massena. Funeral services were held from St. Mary’s Church Saturday morning.

Notes for May O. Tebo:

Fort Covington Sun, Thursday, 4 August 1960: Funeral services for Mrs. May O. Peets, 77, of Brushton, widow of Louis Peets and mother of Mrs. William Boyle of Fort Covington, who died Sunday evening, were held from St. Mary’s church, Brushton, yesterday (Wednesday) morning at ten o’clock. The Rev. Gerald Seguin officiated at the high Mass of requiem. Interment was in the parish cemetery. Mrs. Peets was born in Cheboygan, Mich., June 26, 1883, a daughter of Adelbert and Electa Durant Tebo and went to Brushton 42 years ago where she had since resided. She was a member of St. Mary’s church in Brushton and a member of the Altar and Rosary Society of that parish. She was also organist of the parish for 16 years. She died on her way to the Malone hospital after being stricken ill at her home. In 1903 she was married to Louis Peets, who predeceased her in 1951. Surviving are, one son, Adelbert Peets of Malone; two daughters, Mrs. William (Mae) Boyle of Fort Covington and Miss Madeline Peets, at home; one adopted son, James C. Peets, at home; four grandchildren and several nieces and nephews. 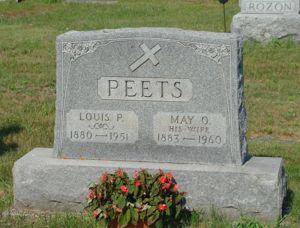 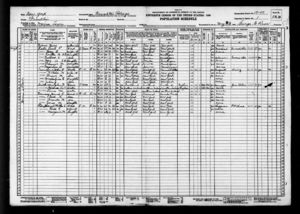