Louis was born in 1836. He is the son of John Pelkey and Second Daughter Wīhą́gā. The 1860 census shows him to have been born in Illinois. The Hocagara had a large number of villages along the rock river in what is now that state.

An affidavit given in 1838 states, “Personally appeared John Pelky, a white man aged 26 years who being duly sworn according to Law, doth depose and say that he resides at the Four Lakes Wis. Ty — and has been in this Country about ten years. That about three years ago he was lawfully married to We-un-kah — an orphan, and full blood Winnebago woman, niece of Wild Goose who was a principle Chief. … That he has by his said wife one male child, named Louis, about 2 years old — That said boy is a fine active fellow, and that your deponent has a strong desire to educate him — that he your deponent speaks the Winnebago language, and has as he verily believes a strong influence with the Indians …” (Waggoner, 62a)

Louis enlisted from Winnebago City, Minnesota on 15 July 1861 along with his brother James. They served in Co. H, Second Minnesota Infantry Regiment. (MN in the Civil and Indian Wars, 141)

He died 16 July 1862 of typhoid fever while at the Estes House military hospital at Keokuk, Iowa. He is buried at plot Sec. B, Site 201, Keokuk National Cemetery, Keokuk, Lee County, Iowa, USA (Find a Grave)

ask our community of genealogists a question.
Sponsored Search by Ancestry.com
DNA
No known carriers of Louis's ancestors' DNA have taken a DNA test.

Images: 2
The Gravestone of Louis Pelkey, by Solomon Alexander 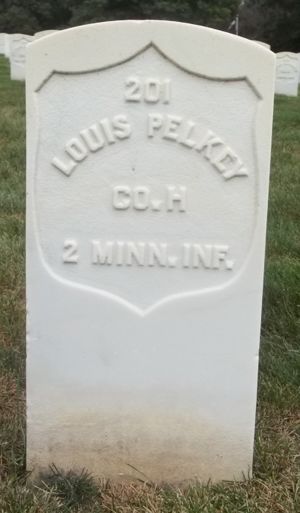 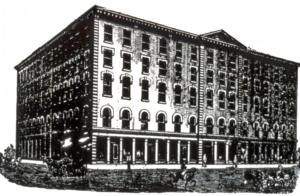