This profile is part of the Pepperrell Name Study.

William was the son of William Pepperrell.[1]

He is widely remembered for organizing, financing, and leading the 1745 expedition that captured the French garrison at Fortress Louisbourg during King George's War.[4]

Note N3816Stephen8 Chase, Merchant, of Portsmouth, was graduated at Harvard College in 1764. In 1778, he removed from Newcastle to Portsmouth, where he died in 1805. He was a gentleman of much literary culture, and was on of the founders of the Portsmouth Athenaeum, for which he drew up the Constitution and By-Laws. He married Mary, daughter of Joseph Frost, Esquire, of Newcastle, and grand-daughter of the Honorable John Frost, who was born at Kittery, March 1, 1683, and who in early life, as an officer in the Royal Navy, commanded a British ship of war, and was of the Governor's Council in 1727. He married Mary, daughter of William and sister of the first Sir William Pepperrell, Baronet. The mother of Mary (Frost) Chase was Margaret, daughter of Samuel Colton of Springfield. (Chase - p13) 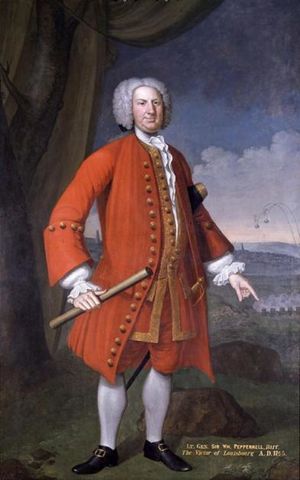 Leave a message for others who see this profile.
There are no comments yet.
Login to post a comment.
Betty Jo Bunker
Activists in Saco Maine is trying to remove William Pepperell's name from A square in Saco because he owned slaves.. a heads up

The profile Pepperrell-2 was an orphan profile that I have adopted as part of my Pepperrell Surname Study.

posted on Pepperell-8 (merged) Dec 03, 2019 by Phillip Pepperrell
Nace Few
Pepperrell-21 and Pepperell-8 appear to represent the same person because: Pepperell-8 is the only William b. to William & Margarey, although when his profile was created, it was created missing a 2nd letter r, as in Pepperrell. That needs to be changed. The dates for Pepperrell-21, appear to be made up, as the reference to Old Kittery and Her Families, page 364, does not mention the given birth & death. In fact, in that reference, page 649, it states that William Pepperrell(Pepperell-8) was b. 1690. It makes no reference to a William b. c. 1660.
posted on Pepperell-8 (merged) Jul 29, 2019 by Nace Few

Robin Lee
Pepperell-68 and Pepperell-8 appear to represent the same person because: same father, no indication of two sons with the same name
posted on Pepperell-8 (merged) Apr 22, 2016 by Robin Lee