Samuel Pepys PRS, MP, JP, (23 February 1633 – 26 May 1703) was an English naval administrator and Member of Parliament who is now most famous for the diary he kept for a decade while still a relatively young man. Although Pepys had no maritime experience, he rose by patronage, hard work, and his talent for administration to be the Chief Secretary to the Admiralty under both King Charles II and King James II. His influence and reforms at the Admiralty were important in the early professionalisation of the Royal Navy.

The detailed private diary Pepys kept from 1660 until 1669 was first published in the 19th century and is one of the most important primary sources for the English Restoration period. It provides a combination of personal revelation and eyewitness accounts of great events, such as the Great Plague of London, the Second Dutch War, and the Great Fire of London.[1]

Samuel was said to have been born at Brampton in Cambridgeshire on 23 February 1633, [2] the second son of John Pepys, tailor of Salisbury Court, Fleet Street, and his wife, Margaret Kite, daughter of a butcher of Whitechapel. He was baptised at St Bride, Fleet St on 3rd March [3] which suggests that he was born in London. Educated at Huntingdon and St Paul's he entered Magdalene College, Cambridge in 1651, obtaining a BA in 1654. [4] While at Magdalene he shared rooms with Robert Sawyer who would go on to be Speaker of the House and Attorney General. [5]

On 1 December 1655 he married a French girl, Elizabeth, daughter of Alexander de St Michel of Hind Court, Fleet St. and his wife Dorothea Kingsmill [6] There is a suggestion that they were married earlier and this occasion was to formalise the marriage. [7] It proved a turbulent and childless match [8] but did not prevent Samuel from furthering his education. He obtained his MA in 1660, [4] the year of the Restoration of the Monarchy, and also the year that he began to write his secret diary. His family relationship with Edward Montagu, created Earl of Sandwich that year, gave him access to the men of power, and he thus began his career with the Navy.

Elizabeth died childless on 10 November 1669 and Samuel never remarried. He first entered Parliament as member for Castle Rising in 1673. [9]

Never a Catholic he was always a loyal supporter of the Duke of York which placed him in harm's way during the Exclusion Crisis and the time of the Popish Plot. While a prisoner in the Tower he set about defending himself notably against the accusations of the informant, John Scott, and wrote letter after letter seeking information against his enemy. [10]The correspondence, his extensive library and his diary were eventually donated to Magdalene College, Cambridge.

Samuel Pepys diary is available for download at Project Gutenburg 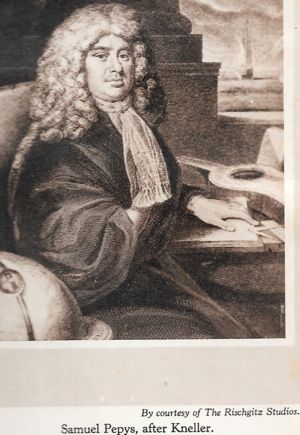 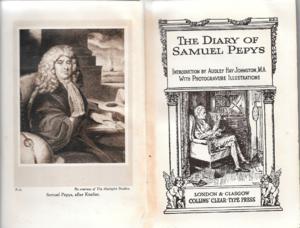 C. Mackinnon
Samuel died in Clapham. He was ill and was being cared for by a friend. He was buried beside Elizabeth in the City where they had shared their lives.
posted Aug 21, 2019 by C. Mackinnon

Wendy (Ling) Sullivan
Clapham was in Surrey in Samuel's lifetime, and it is not unheard of that a husband be buried beside his wife who passed before him.
posted Jun 08, 2019 by Wendy (Ling) Sullivan
[Living Bethune]
Geography seems to have gone adrift? He died at Clapham, then in Surrey, and was buried in St Olave Hart Street, which was and is in the City of London. Haven't checked other places mentioned.
posted Jun 08, 2019 by [Living Bethune]

C. Mackinnon
Should that piece on Impington Hall be in a free space profile? It really wasn't that important to Samuel.
posted Oct 14, 2018 by C. Mackinnon

Th current draft of Biography is Perfectly on target. I would only underscore, it is beyond expectations. There have been some good online sites that provide good abridged highlights, and good followup context.

This perspective has really been limited or missing from a lot of the community commentary of pre 1700 genealogy and also 18th 19th century.

My edition was published by Collins. the actual diary should be listed as a source. The edition comes with an outstanding Index of hundreds of people and places that were part of Pepys life.