Henry Percy, 4th Earl of Northumberland, KG (c. 1449 – 28 April 1489) was imprisoned for eight years, after his Lancastrian father was killed at the Battle of Towton. He was tossed in the Tower of London when he was just a minor. He eventually recovered his position in 1469.[5]

At the Battle of Bosworth, Percy had command of one of three groups defending Richard III, but failed to commit troops.[5] He was briefly imprisoned by Henry VII, but later restored.[1] A few years later he was murdered at Cock Lodge during an anti-tax riot on 28 April 1489.[5] He was buried at Beverley minster in Percy chapel.[5]

ask our community of genealogists a question.
Sponsored Search by Ancestry.com
DNA Connections
It may be possible to confirm family relationships with Henry by comparing test results with other carriers of his Y-chromosome or his mother's mitochondrial DNA. Y-chromosome DNA test-takers in his direct paternal line on WikiTree: 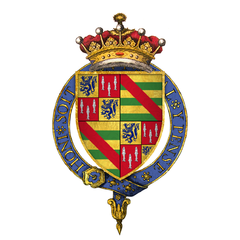 Leave a message for others who see this profile.
There are no comments yet.
Login to post a comment.
Bree Ogle
I love the background graphics for this profile. Great job!:)
posted Jul 22, 2015 by Bree Ogle

Categories: House of Percy | Prisoners of the Tower of London | Battle of Bosworth Field | Knights Companion of the Garter