After the Balmain Steam Ferry Co. was floated Henry and Harold began a ship repair business. In the early 1880s he began importing and cutting up bulk rubber for railway-carriage buffers, and by 1883 was trading in a wide range of rubber products, as well as parts for steam engines, at Erskine St, West Sydney. In 1885 Henry began manufacturing rubber goods for mechanical, agricultural, surgical, mining and general purposes. The Sydney Rubber Works was set up on Birkenhead Point, in Cary St, Drummoyne in 1900. The factory produced tubing, hose, rubber rollers and other mechanical goods, moulded products, footwear, coated fabrics, as well as tractor, cycle, and motor tyres. He formed the Perdriau Rubber Co. Ltd., in 1904, with himself as chairman. In 1928-35, after the company amalgamated with the Dunlop Rubber Co. of Australasia Ltd, he was a director of Dunlop-Perdriau Rubber Co. Ltd.

The Sydney Rubber Works was closed in 1977 after plans to move the plant to a new site at Rooty Hill were shelved indefinitely. The wider use of the radial ply tyre which doubled tyre life, and gave greater fuel economy was the main reason this occurred. The site was partially converted to a shopping centre with some of the heritage listed buildings converted for the purpose.

The Mail (Adelaide, SA. : 1912 - 1954), Saturday 21 August 1915. [2] PERDRIAU RUBBER TYRES. FIRST RUBBER MANUFACTURERS IN AUSTRALIA. The Perdriau Rubber Co., Ltd., 270 George street, Sydney, New South Wales with their fine, up-to-date factory at Drummoyne, and their State branches at 105 Elizabeth street, Melbourne, 67a Gawler place, Adelaide, 307 Adelaide street, Brisbane, and 312 Murray street, Perth, commenced in the rubber business in 1882 - 33 years ago and thus have the honour of being the first rubber manufacturers in Australia. Since those first days the company's works, interests, and business generally have progressed in a wonderful degree, until their trade to-day extends to every branch of rubber accessories, from motor car, motor cycle, and solid tires to rubber boots and feeders for calves. The fact that the company have been specialising in rubber manufactures for over a quarter of a century has given special opportunities of making exhaustive tests and experiments as to the best class of rubber tires to make, in order to best fit them for colonial roads, climates, and conditions. The factory is really a rubber tire laboratory, under the direction of skilled specialists and a first-class staff. The result is seen in the splendid pneumatic and solid tires which are on all the chief Australasian roads, and also along the thousands of byways in the various States. The factory at Drummoyne is equipped with every up-to-date device to get the best results from the materials used. The utmost attention is given to every manufacturing detail. Only the best of cotton and rubber are used, and these are constantly tested to secure the uniformity necessary in such wear resisting tires. No claim is made for any secret process by which second-class materials can be used, and from them first class results obtained; but the fact remains - and this the company's experts wish to demonstrate in quite a definite manner to Australian motorists - first-class tires are made because every thread of cotton and every ounce of rubber is the best that is procurable. The use of the best, and of only the best, enables the Perdriau Rubber Company to give the following undertaking in connection with tires bearing the name of Perdriau, and sold by them at prices quoted in their lists: - "If one of their motor tires, within 12 months of sale, and before having run 3,000 miles, develops any defect that is the result of faulty manufacture, it will be repaired, free of charge, or the mileage short of 3,000 made good by allowing discount off the price of a new tire in proportion to the mileage short run." Owing to the great rush of orders from various portions of the Commonwealth, the Perdriau Company have had to adopt the principle introduced in the big English tire factories, and work three shifts, the whole 24 hours of the clock. The factory at the Perdriau Rubber Company's works is now running three shifts of eight hours each in consequence of large orders which have to be executed for all portions of the Commonwealth.

Educated locally, at 10 years of age Henry witnessed the trials of his father's 60' 60 passenger steam ferry Alma, the first built at Balmain. He joined his fathers firm and after the retirement of his father in 1880 took over the firm with his brother Harold. They traded as Perdriau Bros selling out in June 1882. Henry became involved in importing and cutting up bulk rubber for railway carriage buffers. He began manufacturing in 1885 and with expansion opened a warehouse in George St and a plant in Drumoyne. The Perdriau Rubber Co was formed in 1904 with an authorised capital of 150,000 pounds, with Henry as chairman.Henry was a director of the Dunlop - Perdriau Rubber Co Ltd from 1928-1935.Henry took a keen interest in sport, church and social welfare. Along with bowling and rowing Henry was a Freemason and elder and benefactor of the Presbyterian church Drummoyne. 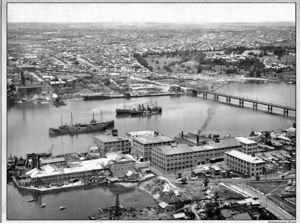 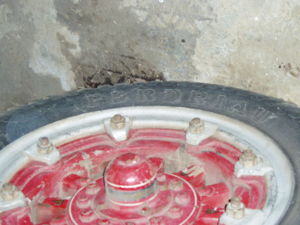