Deacon Thomas Perkins was baptized on 28 Apr 1622 at Saint John The Baptist Church in Hillmorton, Warwickshire, England.[1][2][3] He was the son of John Perkins Sr. and Judith Gater. Together with his family Thomas went to Bristol, Bristol County, England where they sailed for British America on 01 Dec 1630 aboard the Lyon, William Pierce-master. They arrived in Nantucket, Massachusetts on 5 Feb 1631 and went from there to Boston where the family stayed for about 2 years until they moved to Ipswich, Essex County, Massachusetts. He was made a freeman. He had a grant of land, which he sold to his brother, John Perkins, and others, and removed to New Meadows, Topsfield, Essex County. Massachusetts. He was a farmer.[4]

He married, about 1640, Phoebe Gould, born 1620, daughter of Zaccheus Gould. Her father gave them a farm of one hundred and fifty acres in the central part of Topsfield, where they resided until July 6, 1660. He bought a two hundred and twenty-seven acre farm of Richard Swain on the east road from Topsfield to Wenham, situated near the Ipswich line, adjoining the farm of Zaccheus Gould.[4]

At Ipswich, he owned Sagamore hill, a tract of land 170 feet high, surrounded by salt marsh and having Fox Creek on the east. He traded this property with his brother John for a house and lot in town. He spent only a few years there, moving to Topsfield.

Thomas was a farmer by occupation. His farm and homestead joined that his brother-in-law, Redington, not far from the Newburyport turnpike. 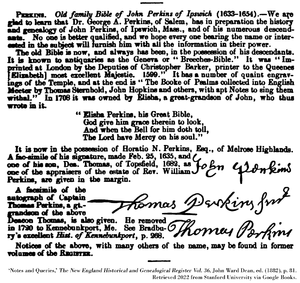