Perón was born in Lobos, Buenos Aires Province, on October 8, 1895. He was the son of Juana Sosa Toledo and Mario Tomás Perón. Juana Sosa was descended from indigenous Tehuelche from Patagonia in Argentina's south and his father, Mario Perón's forbears emigrated to Argentina from Spain, and the Italian island of Sardinia. The Perón branch of his family originated in Sardinia, from which his great-grandfather emigrated in the 1830s. His parents had their two sons out of wedlock and married in 1901.

He was three times elected as President of Argentina, serving from June 1946 to September 1955, when he was overthrown by a coup d'état, and from October 1973 to July 1974.

Perón returned to Buenos Aires with clear signs of pneumonia and, on June 28, 1974, he suffered a series of heart attacks. Perón suffered a final attack on July 1, 1974.

Is Juan your ancestor? Please don't go away!

ask our community of genealogists a question.
Sponsored Search by Ancestry.com
DNA
No known carriers of Juan's ancestors' DNA have taken a DNA test. 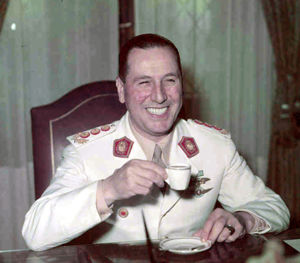