This is John Phillips wrote a will in 1691, that was proved in 1692. He married four times, Mary, Grace, Faith Clark and Anne Hatch.

Another John Phillips died 1682; married Joanna and Sarah. He was NOT the husband of Faith (Clarke) Doty.[1]

The origins of John Phillips of Duxbury and later of Marshfield, Massachusetts are unknown. His birth is estimated to be about 1602 by his will dated October 20, 1691, in which he stated he was about 89 years old. [2]

John's first wife's name is unknown, but from his will, some of the children listed are from a marriage prior to his marriage to the widow Grace (___) Halloway/Holloway. [2] [3] Some have assumed her first name might have been Mary, based on their daughter being named Mary.

Edward Buckley and Grace Hallowell, had given bond in the Plymouth Court to secure L10 each, from the administration of their father William's estate. On June 8, 1654, Mr. Buckley was cleared by the court from this obligation and John Phillip's took on the responsibility for the payments. [3]

A John Phillips, son of John and Mary Phillips was bpt. 4 Aug 1622 in Duncton, Sussex, England[17] There is no evidence to connect the immigrant with the John bpt. in 1622

Note: BIOGRAPHY: John, his wife, and two children (Mary and John), arrived in New England aboard one of the eleven ships of the Winthrop Fleet in 1630. They do not seem to have been aboard the same ship as Rev. George Phillips. Son Michael's name is not immediately apparent on this list. [citation needed]

BIOGRAPHY: John became solvent and successful, and active in the legal and social life of the community. Here is a portion of a document, courtesy the Mayflower web site...

BIOGRAPHY: From original warrant] On 6 March, 1721/2, "mr]Epharaim Randall mr John Phillips mr Benjamin Drake mr Thomas manley & mr Clementt Briggs" .... "All sufficient freeholders within the County of Bristoll or any three of you" wereappointed "to make a Divission on ye Houseing and Lands of mr Samuell Kingsley of Taunton North Purchass Deceased Intestate and also of his Personall Estate .... amongst the Widdow and childreen and shuch as shall Legally represent them if any of them be Dead". "The gentleman Above Named" Were Sworn the same day. [Also recorded, 4: 141] (Note: different man, after this John's death)

BIOGRAPHY: from the criminal record of WILLIAM LATHAM:

What proves this is the same William who went to Hartford?

Answer: no corresponding children born in Shermanbury. We don't know her first name or her last. 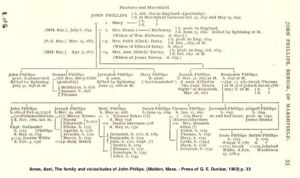 Anne B
I had it right the first time. Sorry about all the messages.
posted Dec 06, 2018 by Anne B

Anne B
Phillips-9089 and Phillips-3053 appear to represent the same person because: Use b. 1601. death Oct 1691 was date of will the other is date of probate. Grace Dotey was name of her first husband She is Grace Unknown. Son Benjamins are the same
posted Dec 06, 2018 by Anne B

Anne B
Regarding John: (1) There was a John bpt. 1622 in Arlington to a John and a Mary. However, there is no evidence to connect this family with the family in Massachusetts. (2) Faith Clark, widow Doty was married to the immigrant father John not the son. (3) The John who died in 1691 was the immigrant father. Terry and Howard, who would you like this to be? Please respond by placing a comment here.
posted Nov 28, 2018 by Anne B
Chris Hoyt
Thank you
posted Nov 28, 2018 by Chris Hoyt

Anne B
Mary Street is real enough but there is no proof she was the wife of this John Phillips. Objections to disconnecting?

Mary Gerrard is real enough, but there is no evidence to link her with Phillips either. Merges have been proposed, Then she will need to be disconnected.

Anne B
Phillips-713 and Phillips-7721 do not represent the same person because: they weren't the same guy yesterday. Need to straiten this out.
posted Nov 28, 2018 by Anne B

Jillaine Smith
And after we've identified the two different John Phillips, each should be PPP'ed so we don't accidentally merge them. Thanks.
posted Nov 28, 2018 by Jillaine Smith