John Phillips was aboard the RMS Titanic.

John George "Jack" Phillips was born in Godalming, Surrey, England, to George Alfred Phillips and Anne Sanders. After Phillips finished school in 1902 he passed the Civil Service exam and began working at the Godalming Post Office where he learned telegraphy. In March of 1906 Phillips joined Marconi's Wireless Telegraph Company and attended their training school in Liverpool for five months.

After leaving the Marconi School Phillips' was assigned to the White Star Line ship Teutonic and he later worked on board the Campania, the Corsican, the Victorian, the Pretorian, the Lusitania and the Mauretania. By May 1908, Phillips went to work at the Marconi Shore Station outside Clifden, Ireland, where he worked transmitting and receiving messages from the Marconi station at Glace Bay, Nova Scotia where he worked until 1911. He was assigned to the RMS Adriatic and later, in early 1912, to the Oceanic. In March 1912 Phillips was went to Belfast to join the RMS Titanic has Chief Radio Officer where he signed articles with Harold Bride, the Junior Wireless Officer. The Radio Officers were part of the Victualling Department at the time Wireless Communication was considered useful to the Passengers and not to the vessels operation.

Cyril Evans Radio Officer of the Californian was instructed by Captain Stanley Lord, when he learned that the Titanic was in the vicinity, to warn Titanic that his ship was stopped in the ice. Unfortunately, Evans didn't listen to the exchange of signals between Titanic and Cape Race before he transmitted and his stronger signal stepped on the fainter acknowledgement signals from Cape Race. Phillips, who was listening closely to read the faint signals, almost had his ears blasted off by the stronger signal from the Californian. Since the content of Evans' message was informal, Phillips abruptly cut him off with "D - D - D," which means "Shut up!". Had Evans instead submitted a formal report with the MSG prefix, Phillips might still have been irritated but would have, by virtue of regulation, dutifully copied the message and delivered it to the Bridge.[1]

When Titanic hit the iceberg on 15 April 1912, Jack sent distress messages using both the CQD and SOS distress calls. This was the first use of SOS by a Britsh Ship[2]. Despite being relieved of their duties by the Captain when the call came for every man for himself, the two Marconi operators men stayed in the wireless cabin sending messages until the power went out.

Four days after his 25 birthday Jack Phillips did not survive the sinking of the Titanic and his body was never recovered.

There are several memorials to Jack Phillips in Godalming. The foremost is the Jack Phillips memorial cloister, between the River Wey and the parish church of St Peter and St Paul, with its garden designed by Gertrude Jekyll. He is also commemorated on his family's grave in Nightingale Cemetery, and on a brass plaque in St John's Church in Farncombe, where he was a choirboy. One of the town centre pubs, the Jack Phillips, is also named after him. 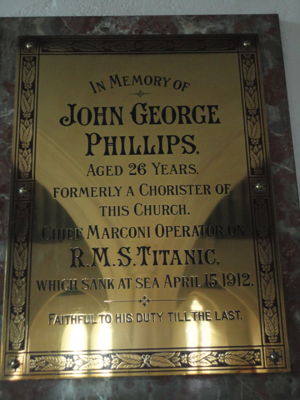 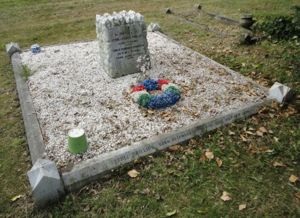