Franklin Pierce, 14th President of the United States, was born November 23, 1804, in Hillsborough New Hampshire, in a home raised out of the wilderness by his father, a veteran of the Revolutionary War.

His father was a man of unquestioned integrity, a strong mind, however uncultivated, and an uncompromising Democrat. Franklin’s mother was an affectionate, intelligent, and devoutly-religious Christian woman.

Franklin, the sixth of eight children in the family, was a handsome boy, generous, warm-hearted, and making friends of all ages wherever he went. Instinctively a gentleman, he avoided harsh interactions with a level of natural tact that dictated what was agreeable to him, and others. He was a good student, despite any lack of genius and natural devotion to books and reading.

In 1820, at the age of 16, he entered Bowdoin College at Brunswick, Maine. He was popular with all the students and teachers due to the strength of his moral character and his courteous and easy-going nature, and was admired as a winning speaker.

After graduating in 1824, Franklin began studying the law in the office of Judge Woodbury, a distinguished lawyer in New Hampshire. He began to follow his employer into a political career, at first working to elect Andrew Jackson to the Presidency. While practicing law, he was elected to represent the town as a State Legislator. The last two years of his term was spent working as Speaker of the House.

In 1833, at age 29, he was elected to the U.S. Congress. At the age of 33, he joined the Senate as its youngest member at the time Martin Van Buren was assuming the Presidency. While a Representative in 1834, he married Jane Means Appleton and, together, they had three sons. All are now buried near each other in the family plot.

Franklin and his family moved to Concord, the capital of New Hampshire, in 1838, due to his increasing fame and growing legal business. He was appointed, but refused, the office of U.S. Attorney General under President James K. Polk, due to his professional commitments and his wife’s failing health. He also declined the Democratic Party’s nomination for Governor of New Hampshire about the same time.

The war with Mexico forced Franklin to join the U.S. Army. He embarked with his troops in May 1847 as a Brigadier General. He was honored as a brave and true soldier throughout the hostilities. Returning to New Hampshire after the war, he was welcomed by advocates of the war, but coldly by those who opposed the war. He resumed his law practice after arriving back home.

He frequently involved himself in politics, actively supporting the pro-slavery wing of the Democratic Party, and enforcement of the infamous Fugitive Slave Law. His positions shocked the religious-leaning politicians of the North, becoming known as “the Northern man with Southern principles.”

The Democratic Convention in Baltimore in June 1852 met to nominate a Presidential candidate. No one earned the required 2/3 vote in four days and 35 ballots but, after 14 additional ballots, Franklin topped all the other candidates on the 49th ballot, with a vote of 282 to 11. He defeated the Whig candidate, Gen. Winfield Scott, and was inaugurated President March 4, 1853.

Franklin’s administration proved to be one of the most controversial in American history to that point, primarily due to the conflicts between slavery and freedom, proving the nation could not long exist “half slave and half free.” His efforts to work with the South were all in vain, every year became more violent than the last, and the spectre of a civil war became more real. At the close of his term in office, the North was alienated from him due to his administration’s activities regarding anti-slavery sentiments. He had also managed to alienate the Southern slaveholders, who forgot how he had originally supported them so vigorously. James Buchanan was selected to succeed him in office.,

President Pierce returned to his home in Corcord in March 1857. His three sons were now dead, and Jane was dying of consumption.

When the Civil War divided the country into two distinct factions, Franklin remained steady in his beliefs and loaned his voice and support to the South. He did nothing to support the U.S. government, the North, yet remained in Concord until he died in October 1869.

Other information: Franklin Pierce was the 14th President of the United States and the first, and only, President from New Hampshire. He was a very complex individual a northerner with southern sympathies. He was a successful lawyer by trade that took part in the Mexican American war becoming a brigadier general. He had a relationship with Jefferson Davis during the Civil war that many considered treason. All of his children died young and after the presidency his alcoholism attributed to the demise of his marriage.

1804 November 23
Born to Benjamin and Anna, the fifth of eight children most likely at the Franklin Pierce Homestead, which his father had built that year in Hillsborough, New Hampshire. [1]

Sponsored Search by Ancestry.com
DNA
No known carriers of Franklin's DNA have taken a DNA test. 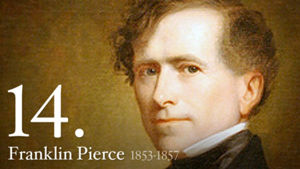 Winfield Scott vs. Franklin Pierce race for the presidency in 1852 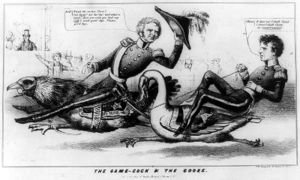 Scott Hutchins
Some sources give his middle initial as B. Have they been debunked?

Is Anna Kendrick the actor of the same family as his mother?

Robin Lee
I have never seen a source with a middle initial of B. If you mean there are family trees with that initial, could be, but surely no reliable sources.

Scott Hutchins
I remember learning his middle initial was B when I was a kid. This at least makes me think I'm not crazy even if it's not accurate: https://www.amazon.com/Franklin-Pierce-Jacksonian-Democracy-Presidents/dp/1612099904
posted Feb 16, 2021 by Scott Hutchins
Sally x
engraved portrait at http://research.archives.gov/description/518079
posted Dec 07, 2014 by Sally x