Barbara Pierce was born 08 June 1925 in New York City, New York to Marvin and Pauline (Robinson) Pierce.[1][2][3] Marvin was a publishing executive and later president of McCall Publishing Company.[1][2] They raised Barbara and her siblings for many years in Rye, Westchester, New York.[1]

Barbara met George HW Bush at age 16 at a party in Greenwich, Connecticut.[1][2] They were engaged a year and half later.[1] Barbara left Smith College, as George was preparing to ship out during World War II, and they were married while he was on leave from the Navy, 06 January 1945 in Rye, New York.[1][2] Their marriage lasted over 73 years, the longest presidential marriage in US History.[1][2]

Barbara was known for her straightforward manner.[1] She was honest, but gracious.[1] She was a solid supporter of her husband both at home and in the political world, even when they didn't agree politically.[1][2] She was the persona of the traditions of the state she loved, Texas, showing grace and politeness to everyone, along with a snappy humor.[1]

Barbara died at home April 2018, with her husband by her side.[1] She died from complications from congestive heart disease and chronic obstructive pulmonary disease.[1] She planned to be buried by her daughter, Robin, in the family plot near her husband's presidential library at College Station, Texas.[1]

Barbara was an advocate for literacy, working to encourage youth to love reading as much as she did, having been inspired by her son Neil's dyslexia.[1][2] She loved teaching them to read and giving families tools to continue that legacy.[1] She pushed for the National Literacy Act, which was signed into law in 1991, as well as the National Literacy Foundation, which she continued to work with even after her husband left the presidential office.[1] She also sent profits from her books to her namesake Barbara Bush Foundation for Family Literacy.[1] She felt it was important to do something for somebody, to help someone, every day.[1][2]

Sponsored Search by Ancestry.com
DNA
No known carriers of Barbara's DNA have taken a DNA test. 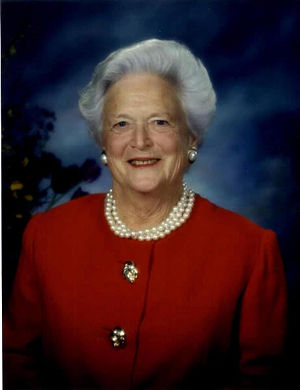 The Sisters of Freddie Stowers at His MOH Ceremony - 1991 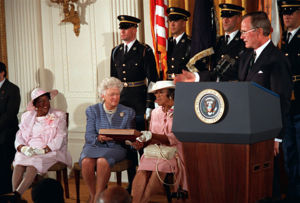 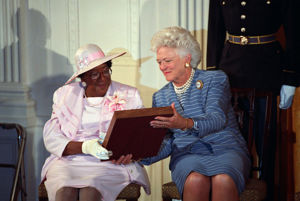 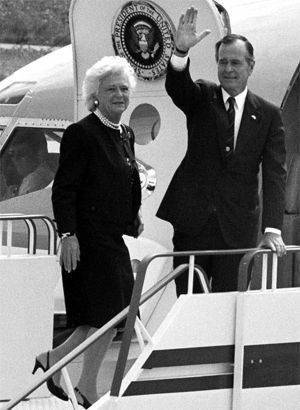 Robin Lee
Pierce-10910 and Pierce-4 appear to represent the same person because: clearly intended to be the same person, please approve this merge
posted Nov 15, 2018 by Robin Lee

Mary (Gulish) Gi
She was a very classy LADY. Alot of people have and will continue to enjoy programs she started up. RIP
posted Apr 22, 2018 by Mary (Gulish) Gi
Gerry Hagberg
Why should we hear about body bags and deaths? Its not relevant. So why should I waste my beautiful mind on something like that.  Barbara Bush