George Wildon Pieritz was born in Klecko, Poland [1] (Cambridge Alumni says Prussia) on 3 May 1808, the son of Jewish parents, merchant Joachim Pieritz and his wife, Emily Moritz. He became a rabbi at the age of 18. [2] He became a Christian about 1834 and, sponsored by Frederick William III King of Prussia and the historian, August Neander, [3] he was baptised in the Christian faith at Sankt Nikolai, Berlin on 9 June 1835. [4] He was part of the Mission to the Jews of Palestine 1837-1840 [5].

It was presumably after the death of his wife that he joined the mission to Jerusalem. Among other projects was the building of a church in Jerusalem. In July 1840 a young architect, William Curry Hillier, arrived in Jerusalem to supervise the work. William survived barely a month, dying of typhus in August. If they had not met before then this must have been when George made contact with William's family.

After his time with the mission George went to Caius College, Cambridge to continue his education. He was ordained deacon in 1846 and priest in 1847, [5] the year of his second marriage. On 21 September 1847 at Rochester in Kent he married Sarah Elizabeth Hillier [9][10] sister of the William Curry Hillier who had died in Jerusalem in 1840 and daughter of William Curry Hillier of the Royal Navy and his wife, Ann Batten. Together they went on a mission to Ahmenabad in India. [5] Two children were born to the marriage in India, Augustin Hillier [11] and Anna Latitia [12]

By 1861 the family was back in England. [13] Augustin died early in 1864 [14]and was buried on 1 February at St Andrew, Cambridge. [15] Later that year George was appointed rector of Hardwick in Cambridgeshire, [5] a post which held until 1870. Thereafter he had no cure of souls. 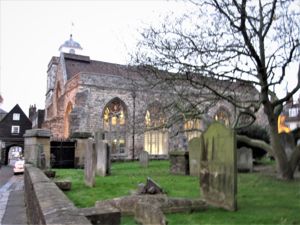