Lady Mary Wortley Montagu (15 May 1689 – 21 August 1762) was an English aristocrat and writer. Lady Mary is today chiefly remembered for her letters, particularly her letters from Turkey, as wife to the British ambassador, which have been described by Billie Melman as “the very first example of a secular work by a woman about the Muslim Orient”

Lady Mary Pierrepont was born in London on 15 May 1689; her baptism took place on 26 May at St. Paul's Church in Covent Garden. She was a daughter of Evelyn Pierrepont, 5th Earl of Kingston-upon-Hull, and his first wife, Lady Mary Fielding. As a pioneer of modern medicine, she was the first European who insisted on inoculation of her children of small doses of smallpox long before programmes of preventative medicine began, based on her own observational evidence of Turkish milkmaids similarly inoculated who recovered from the disease. Her mother had three more children before dying in 1692. The children were raised by their Pierrepont grandmother until Mary was 9. Lady Mary was then passed to the care of her father upon her grandmother's death.

She eloped with Edward Wortley Montagu. They were married on 23 August 1712 in Salisbury

A quote attributed to Lady Mary Wortley Montague: "No entertainment is so cheap as reading, nor any pleasure so lasting." (Griffiths: Page iv)

Page 9-10: "She was born at Thoresby, in Nottinghamshire, about the year 1690, and lost her mother in 1694." She "had two sisters: Lady Frances, who married John Ereskin of Mar, and Lady Evelyn the wife of John Leveson Lord Gower, who was the mother of the present Marquis of Stafford."

"Lady Mary Wortley Montague was daughter of Evelyn, 5th Earl of Kingston, who was in 1706 Marquis of Dorchester, by Queen Anne, and in 1716, Duke of Kingston; and Tong was the scene of early years, if not her birthplace (which is claimed by Thoresby). Her youth at any rate must have passed between these two homes of the Pierpoint family. Her letters form a conspicuous part of the literary of her time. Born in 1690, she lost her mother in 1694, being educated under the superintendence of Bishop Burnet, obtained a high degree of mental cultivation. She married Mr. Edward Wortley Montague by special license. Her father had refused him, because he would not make the necessary settlements; and she had allowed him to encourage another suitor; and matters had gone so far that the wedding clothes had actually been bought; but, only making up her mind the evening before, she decided to run away with Mr. Montague, and was married on August 12 1712.""

"It had fallen to the lot of the Duke of Kingston in 1690 to propose a beauty as the aunual toast of the Kitcat Club, and a whim seized him to nominate his little daughter, Lady Mary Pierpoint, then 8 years old. Some of the members demurred, as they had not seen her. The Duke sent for her, and when she arrived, finely dressed, she was received with acclamations, her health drunk, her beauty extolled on every side, and she was petted and caressed by all present, the company consisting of some of the most eminent men in England." 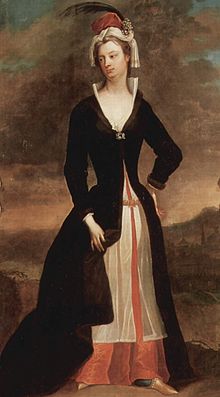