Minnie was born about 1871, probably in the Pigeon Clan.

Her name "Pigeon" was given on her husband's draft card. This would be Ručgewįga in Hocąk. Her clan name, given in the censuses, was Ahugišįnįwįga, from ahu, "wing"; gišį́nį, "shining, brilliant"; -wį-, a feminine gender infix; and -ga, a definite article suffix used in personal names. The name means "Shining (or Brilliant) Winged Woman."

Based on the fact that she had a daughter Kate White Otter born in 1891 (1905 census), she must have been married to someone of that name at least around 1890. She also had a son named "Dave Blowsnake," who was born in 1900, which implies that she was married a second time around 1899. So White Blackhawk (John Davis), to whom she was long married, was at least her third marriage. They had the following children:

ask our community of genealogists a question.
Sponsored Search by Ancestry.com
DNA
No known carriers of Minnie's DNA have taken a DNA test. 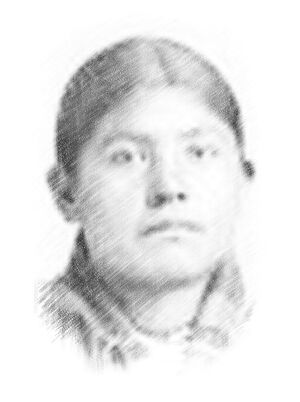