Geoffrey or John was born abt. 1600 in Butley, Cheshire, England. He was the seventh son of Thomas Pigot of Bonis Hall (Bonishall), Cheshire and Joane (Kaye) Pigot. He's referred to as Geoffrey or John in various records and documentation. Geoffrey was one of about the fourth generation of Pigot's that had resided in Bonishall (Bonis Hall), Butley and Prestbury, Cheshire. Butley Manor in Cheshire was the seat of the Pigot family and was originally owned by Geoffrey's predecessor George Pigot m. Catherine Henshaw. Geoffrey's nephew, George Pigot (abt.1611-), was one of many Pigot's to move to Lancashire and continue the family line. Two of Geoffrey's children, Dorothy Pigot (bef.1623-bef.1652) and Thomas Pigot (bef.1625-), were born in 1623 and 1625 respectively, in Prestbury, Cheshire. His second son, Henry Pigot B.D. (1628-1722) was born in 1628 in Staffordshire. So it's reasonable to assume that the move to Staffordshire occurred between 1625 and 1628. See image, "Pigot Genealogy" at right: [1] [2]

Geoffrey/John Pigot and Judith (Davenport) Pigot were the parents of at least two sons and three daughters. [5]

Forton House was built by Geoffrey Pigot in 1638 and has been preserved as part of the Forton and Meretown Conservation Area because of it's distinct architectural style and historical interest to the area. "3.5.3 Forton House A fine stone ashlar house with mullioned windows and gabled dormers, Forton House was built in 1638 by Jeffrey Pigot whose stone quarrying led him into conflict with the Lord of the Manor. The house was extended to the rear in the early in the early 19th century, and altered again in the 1860s. During part of the 19th century the house was occupied by a girl’s ‘boarding academy’." [10]

Death, Burial and the Will

His will was probated on 29 May 1674. He was buried in Forton, Staffordshire on 19 May 1674. [11] In his will Geoffrey mentions Mr. Skrymsher, Lord of the Manor and gives a third of his copyhold land [12] to his wife, Judith. The other two thirds of his copyhold land he bequeaths to his grandaughter, Margaret Piggot and grandson, Thomas Higgins. Evidently, Geoffrey was farming the land owned by Lord of the Manor, Mr Skrymsher. He bequeathed his bay mare, sheep, cattle, swine, cheese and other materials related to husbandry to various members of the family. [5]

Family members mentioned in the order in which they are listed in the will of Geoffrey Pigot/Piggott, 29 May 1674 in Forton, Staffordshire: See Link to Will Transcription. Note: On the third page of Geoffrey's original will, after the blank page, is a complete inventory of his estate. [5]

Note: Geoffrey has a brother, son and grandson all named Henry Piggot. Mr. Skrymsher is mentioned as the Lord of the Manor of Geoffrey's copyhold land.

The Skrymsher/Skrymshire family were a prominent family in Forton, Staffordshire. It's possible that Sir Thomas Skrymsher Knt. (1576-1633) of Aqualate, and/or his progeny may have been the Lords of the Manor of Geoffrey's copyhold land. Sir Thomas was Lord of the Manor at Mere (now Meretown), which is a Hamlet within the Village of Forton, Staffordshire. [14] See notes. There are several beautifully sculpted marble effigies/memorials in All Saints Church at Forton, Staffordshire dedicated to Sir Thomas Skrymsher Knt. and his family. His brother, John Skrymsher (abt. 1593-), at the age of 70 m. Jane Littleton, daughter of Walter Littleton (1560-bef.1628), on 6 Apr 1663. Their daughter, Eleanor Skrymsher, married Thomas Pigot. More investigation needs to be done to determine the details and this Thomas Pigot's possible relationship to Geoffrey. [15] Another son of Sir Thomas', Gerard Skrymsher, built Forton Hall in 1665. See Image of Forton Hall by T.P. Wood - 'Forton Old Hall Taken Out Of The Church Yard.' Over the porch is a panel with 'CSA1665/9.' Anonymous, [T. P. Wood]. [16]

Is Geoffrey your ancestor? Please don't go away!

ask our community of genealogists a question.
Sponsored Search by Ancestry.com
DNA
No known carriers of Geoffrey's DNA have taken a DNA test. 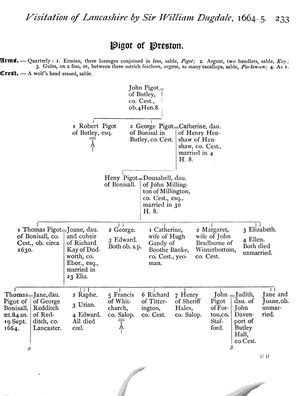 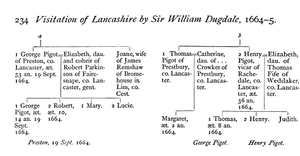 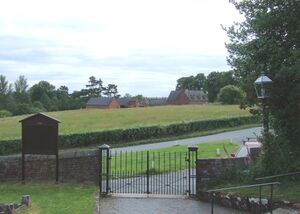