The Pitre family of parents and the first seven children apparently immigrated from Canada to St. Lawrence Co., New York, United States, between 1838 and 1840 based on the reported country of birth for children born in those two years.

Sophie Pitre: Ogdensburg Advance, Thursday 5 June 1913: Brasher Falls: Mrs. John Simmons died very suddenly on Wednesday morning. She had not been feeling very well lately but was able to look after her house and do most of the work. She was married to Martin Raymo and they had a large family of children. He died several years ago and she later married John Simons who survives her, also three daughters and three sons, besides two sisters, Mrs. LaComb, of this place, and Mrs. Quenell, of Helena, and one brother, Frank Lashomb. She was about 55 [sic 85] years of age and had spent most of them here. She was a good neighbor, and mother and very kind to all. Her funeral was held at the Catholic church on Friday. The bearers were Norman Shampine, F.P. Butler, Henry Sebra and Prosper Compo. All her children were present at the funeral.

Pierre Pitre: Ogdensburg Advance, Thursday 7 July 1904: HELENA. Death of Peter Lashombe Helena, July 4.- Peter Lashombe who has been sick for the past year, passed away Friday by dropsy, aged 70 years 8 months. Mr. Lashombe was a man of excellent habits, was liked by all. He leaves a wife and large family of grown children. The funeral was held on Monday, burial in the Catholic cemetery at Brasher Falls.

Julia Pitre: Massena Observer, Thursday 11 May 1911: Brasher Falls, Wednesday morning, May 3, Mrs. Julia Lashomb Shampine was taken very ill and within an hour after she called her granddaughter, Mrs. Charles Shampine, with whom she lived, she died. We honor our civil war veterans when they pass away, and 'tis just that we also honor the wife who was left at home all those sad days and now we must speak of our sister as one of that great number who fought for our safety at home and only that God helped them they could never have gone through the hardship they bore alone. Charles Shampine left for the scene of war and in the home behind him was the wife and 5 little children, the youngest only 3 or 4 weeks old and she cared for them and staid by the home nest while he fought. For over 50 years they lived together and then he was called about 10 years ago. She, being used to meet life as it is, cheered others with her kind greeting and smiles. All ready to go when the call came, day after day, she longed to see him who stood by her side so many years and said "I guess Charley will be glad to see me." Mr. and Mrs. Charles Shampine, with whom she was rooming, from choice, as she had a home on Depot street where she had lived for years, but her grandchildren seemed to understand her so well that it was a delight to stay with them and she could hardly find words enough to express how good Charles' wife was to her. She was married to Charles Shampine in Hogansburg and there were born to them 8 children, Mary A. Burghhart, of California; Henry and William of Brasher Falls; Mrs. Jane Courier, of Brasher Falls; Norman, formerly of Brasher, now living in Central New York; Joseph, of Massena; Mrs. Carrie Brown, of St. Regis Falls, and Edna who died young. She leaves 26 grandchildren and 11 great-grandchildren. The last service was from the M.E. church, Rev. Story officiating. The tokens of affections in Easter lilies and cut flowers were beautiful and her sons and grandsons were the bearers to her resting place in Fair View family lot. "Blessed are the dead who die in the Lord."

Adeline Pitre: Massena Observer, Thursday, 1 May, 1919: Maple Ridge, Brasher: Mrs. Paul Quenell, aged 78, died at her home at Helena last week, Tuesday, after an illness of several weeks of pneumonia. Although she had been an invalid for nearly 30 years she had borne her sufferings with much patience and fortitude. Mrs. Quenell was previous to her marriage, Miss Adeline Lashombe and was the daughter of Peter and Sophia Lashombe of Maple Ridge and always resided in this community until seventeen years ago when they moved to Helena. All who knew her respected and loved her and many will regret losing so fine a friend and neighbor. She leaves to mourn her loss: her aged husband, who is past 80; four sons, David of Helena, Mose of Brasher Falls, Michael and Henry of Massena, also four daughters; Mrs. Eli Fournie, Mrs. Anna Carville, Mrs. Frank Freego of Helena and Mrs. Nelson Guyette of this place. Interment was made at Brasher Falls Thursday. Rev. Father Crowley conducted the services.

Xavier Francois Pitre: Massena Observer, Thursday, 29 August 1935: Brasher Center: Several from here attended the funeral of Frank LaShombe, aged 96 years, last Monday at the Roman Catholic Church, Brasher Falls. Mr. LaShomb was a life long resident of Brasher and the last surviving member of a large family. He leaves three sons, William, of Massena, Henry, of Madrid, and Allen with whom he lives; two daughters, Mrs. Nelson Berry, of Chase Mills, and Florence, of Brasher. We extend sympathy to the family.

Catherine Pitre: Norwood News, St. Lawrence, NY: Wednesday 2 March 1932: Mrs. Catherine Raymo, 84, dies in Massena: Mother of Freeman Raymo of this village - funeral was held at Massena, Thursday - Mrs. Catherine Lashomb Raymo, 84, died at the home of her son, Hubert Raymo, who resides in the section of the town of Brasher, known as Maple Ridge, at seven o’clock Monday evening, Feb. 22, after an illness of only three days. She was born in the town of Brasher at Maple Ridge and is a daughter of Peter and Sophia Norrow Lashomb. Sixty-seven years ago she married Joseph Raymo who died 31 years ago. After the death of her husband she lived in Massena for three years and then went with her son in Brasher where she died. Surviving are four sons: Freeman J. Raymo of Norwood; Peter Raymo of Massena; Thomas Raymo of Brasher and Hubert Raymo of Maple Ridge; two daughters, Mrs. Amos Prashaw, Massena and Mrs. George Small, Massena; two brothers, Louis Lashomb of Parishville and Frank Lashomb of Brasher. The funeral service was held Thursday morning at 10 o’clock at the Sacred Heart church, with burial in Calvary cemetery, Massena.

Louis Pitre: Potsdam Courier: Aged Hopkinton Resident Dies – Shock proves fatal to Lewis Lashomb last week – Hopkinton, March 23 – This community was greatly shocked to learn of the death of Lewis LaShomb, aged resident of this place. Mr. LaShomb had been in good health until Monday forenoon of last week, when he was taken suddenly ill. Dr. Duffy of Parishville was called immediately and hope was held for his recovery until Tuesday afternoon when he had a shock, which completely paralyzed one side. He lived but a few hours afterward and passed away at 4 o’clock Tuesday afternoon, March 15. Mr. LaShomb was born in 1850 in Brasher, the youngest son of Peter and Adelaide LaShomb. He had four brothers and four sisters, all of whom have passed away except Frank, who resides in Brasher. His last remaining sister, Catherine Raymo, preceded him in death just three weeks ago. In 1870 he was joined in marriage with Elisabeth Quenelle, also of Brasher. This union was blessed with ten children, two boys and eight girls. Of this number, two are dead, the oldest boy, Allen, who died in 1905 at the age of 36 and Mrs. Eleanor Ranger, who died in 1924 at the age of 37. Mr. And Mrs. LaShomb resided in Brasher until 24 years ago, when they moved to Hopkinton, where they resided until the death of Mrs. LaShomb which occurred five years ago. This broke up their happy home and since that time, Mr. LaShomb has made his home with his daughter, Mrs. John Sampier of Parishville, from there making frequent visits to the homes of his other children where he was always welcome. Mr. LaShomb was a man well liked by everyone, and greatly loved and respected by his children and all who knew him. He was a loving husband and father, and will be greatly missed by his family. He is survived by one son, Minor, of Parishville, and seven daughters, Mrs. John Sampier of Parishville, Mrs. Jerry LaClair and Mrs. William Sharlow of Massena, Mrs. Walter Hamilton of Syracuse, Mrs. Anna Raymond, Mrs. Joseph Blair and Mrs. Ezra Perry of Hopkinton, 37 grandchildren and numerous nieces and nephews. Funeral services were held Friday March 18 at Holy Cross Church in Hopkinton, with Rev. Father Wilcott officiating. The bearers were the son and five sons-in-laws. Interment was in the Catholic cemetery at Hopkinton beside his wife and daughter. 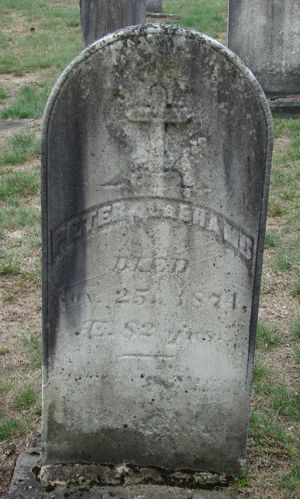