"Francois was born in 1682. He was the son of Jean Pitre and Marie Pesseley. He was to remain the youngest son in the family. Even though his father died when he was only seven, his mother remarried fairly soon providing some sort of stability for Francois and his siblings. The family continued to live in the Port Royal area.

In the summer of 1705 Francois married 18-year-old Anne Prejean, the second daughter of French-born Jean Prejean and his Acadian wife Andree Savoie.[1][2] They had eleven children over the next twenty years, much of which was spent under British rule. In 1725 personal tragedy struck. Twins Anne and Theotiste were born at the end of August, but within three months both the twins had died as well as Francois, who was only 44.

Anne was left with nine children, and they were on their own for the next seven years. In 1732, with four of her brood married, she married again to a widower, Michel Boudrot, who had lost his wife the previous spring. Her daughter had married one of his sons the previous year, and two more daughters and a son would also go on to marry his offspring." [3]

He passed away 5 December 1725 , aged forty-eight years and was buried the next day at Port Royal. Witnesses were Bernard Godet, cousin of the deceased and Jean B. Prejean, his brother-in-law.[4][5]

Is François your ancestor? Please don't go away! 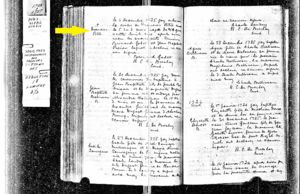