Cesaire was born in 1858. She was the daughter of Pierre Pitre and Marie Rheume.

Marie Cesarie Pitre: Plattsburgh Sentinel, Tuesday, 19 June 1928: The funeral of Mrs. William Bosley Sr. of Mooers Forks, N.Y., who died at the home of her son, William Bosley at that place Saturday June 9th at 2 p.m., was held from the R.C. church in Mooers Forks, N.Y. Rev. Father Gilbert, celebrated the requiem high mass. Interment was last Monday, June 11, at 10 a.m. at Mooers Forks. The deceased was well and favorably known in Mooers Forks and she spent many years of her life here. The news of her death came as a great shock to her wide circle of friends who will sincerely mourn her passing. Mrs. Bosley leaves four sisters, Mrs. Virginia Gebo, Livine Forkey, from Ludlow, Mass., Mrs. Cyrel Rabideau from Forest, N.Y. and Mrs. Frank Berthiaume of Hemmingford, Quebec. Also three brothers, Peter Peete Sr. of Mooers Forks, Joseph Peete of East Hampton, Mass. and Ben Peete of Tupper Lake. She also leaves six boys and six girls as follows: William and Frank Bosley of Mooers Forks, Alfred Bosley of Forest, N.Y., Zephie and Joseph Bosley of Lynn, Mass., Lemmie Bosley of Clinton, Mass., Mrs. Wilfred Favreau and Mrs. James Pinell of Mooers Forks, N.Y., Mrs. Mary Lashway of Standish, N.Y., Mrs. Sarah Bailey of Tupper Lake, Mrs. Pola Fortin of Montreal, P.Q., Mrs. Minnie Lafountain and Emma Favreau of Clinton, Mass. She leaves 66 grand-children and 8 great grand-children. There was a very large attendance at this funeral and between 50 and 60 automobiles followed the remains to the church and cemetery.

ask our community of genealogists a question.
Sponsored Search by Ancestry.com
DNA Connections
It may be possible to confirm family relationships with Sarah by comparing test results with other carriers of her mitochondrial DNA. However, there are no known mtDNA test-takers in her direct maternal line. It is likely that these autosomal DNA test-takers will share some percentage of DNA with Sarah: 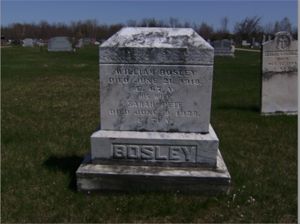