Obituary: Potsdam Courier: Aged Hopkinton Resident Dies – Shock proves fatal to Lewis Lashomb last week – Hopkinton, March 23 – This community was greatly shocked to learn of the death of Lewis LaShomb, aged resident of this place. Mr. LaShomb had been in good health until Monday forenoon of last week, when he was taken suddenly ill. Dr. Duffy of Parishville was called immediately and hope was held for his recovery until Tuesday afternoon when he had a shock, which completely paralyzed one side. He lived but a few hours afterward and passed away at 4 o’clock Tuesday afternoon, March 15. Mr. LaShomb was born in 1850 in Brasher, the youngest son of Peter and Adelaide LaShomb. He had four brothers and four sisters, all of whom have passed away except Frank, who resides in Brasher. His last remaining sister, Catherine Raymo, preceded him in death just three weeks ago. In 1870 he was joined in marriage with Elisabeth Quenelle, also of Brasher. This union was blessed with ten children, two boys and eight girls. Of this number, two are dead, the oldest boy, Allen, who died in 1905 at the age of 36 and Mrs. Eleanor Ranger, who died in 1924 at the age of 37. Mr. And Mrs. LaShomb resided in Brasher until 24 years ago, when they moved to Hopkinton, where they resided until the death of Mrs. LaShomb which occurred five years ago. This broke up their happy home and since that time, Mr. LaShomb has made his home with his daughter, Mrs. John Sampier of Parishville, from there making frequent visits to the homes of his other children where he was always welcome. Mr. LaShomb was a man well liked by everyone, and greatly loved and respected by his children and all who knew him. He was a loving husband and father, and will be greatly missed by his family. He is survived by one son, Minor, of Parishville, and seven daughters, Mrs. John Sampier of Parishville, Mrs. Jerry LaClair and Mrs. William Sharlow of Massena, Mrs. Walter Hamilton of Syracuse, Mrs. Anna Raymond, Mrs. Joseph Blair and Mrs. Ezra Perry of Hopkinton, 37 grandchildren and numerous nieces and nephews. Funeral services were held Friday March 18 at Holy Cross Church in Hopkinton, with Rev. Father Wilcott officiating. The bearers were the son and five sons-in-laws. Interment was in the Catholic cemetery at Hopkinton beside his wife and daughter.

Ida Lashomb: Courier Freeman, Thursday 17 May 1962: Parishville – Funeral services for Mrs. Ida LaShomb Sampier, 82, Allens Falls Road, were held Wednesday at the Holy Cross Church in Hopkinton at 10 a.m., with the Rev. Albert Plante officiating. Burial was at the Holy Cross cemetery. Mrs. Sampier died May 13 in the Potsdam hospital at 4:30 p.m. after an illness of three months. Born in Helena, Feb. 27, 1880, she was the daughter of Lewis LaShomb and Eliza Quenille LaShomb. Mrs. Sampier spent her early life in Brasher and was educated at St. Joseph Academy in Brasher Falls. She married John Sampier June 8, 1898, in Brasher and the couple lived on a farm near Parishville. Mr. Sampier died in 1933. Mrs. Sampier was a member of the Holy Cross Church at Hopkinton. She is survived by three daughters: Mrs. Leonard (Ruth) Bisnett of Parishville; Mrs. Joseph (Belva) Palermo of Niagara Falls; and Mrs. Clifford (Rilla) Dooth of Niagara Falls; two sons: Howard and Leonard Sampier, both of Parishville; three sisters: Mrs. Joseph (Hattie) Blair of Hopkinton; Mrs. Mabel Perry of Sockets Harbor, and Mrs. Lola Hamilton of Syracuse; nine grandchildren and 15 great-grandchildren.

ask our community of genealogists a question.
Sponsored Search by Ancestry.com
DNA Connections
It may be possible to confirm family relationships with Louis by comparing test results with other carriers of his Y-chromosome or his mother's mitochondrial DNA. However, there are no known yDNA or mtDNA test-takers in his direct paternal or maternal line. It is likely that these autosomal DNA test-takers will share some percentage (beta) of DNA with Louis: 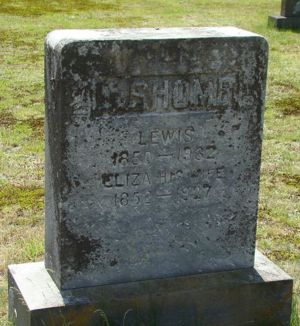