Joseph George Didier "Cannonball" Pitre (1 September 1883— 29 July 1934) was a Canadian professional ice hockey forward. He was nicked named "Cannonball". One of the first players to join the Montreal Canadiens, Pitre's French-Canadian heritage helped give the team the nickname the Flying Frenchman, brought upon by his exceptional speed. He was inducted into the Hockey Hall of Fame in 1962.[1]

Didier Pitre's first major hockey league was in an early IHL playing with the American Soo Indians, who played in Sault Ste. Marie, Michigan. He joined the Soo team in 1904. By 1905/06, he was the already the top scorer in the league scoring 41 goals in 22 games played. Pitre was on the IHL all-star first team that year in 1906 and again in 1907.

The next season, he left as a free agent and played with the Montreal Shamrocks in the Eastern Canada Amateur Hockey Association. He lasted there only one year before leaving to play with the Edmonton Eskimos. He stayed there only three years before jumping contract and coming back to eastern Canada where he played with the Renfrew Creamery Kings for the remainder of the year.

He joined the Montreal Canadiens the next year in 1909. He stayed for four years, before leaving for the west again. He spent a year playing with the Vancouver Millionaires. Pitre returned to Montreal the next year. In 1916, Pitre led the National Hockey Association in regular season assists and points. He scored 24 goals, 15 assists (assists in those days were one per goal and only if the official scorer thought it contributed to the goal being scored) for 39 points. He also helped lead the Canadiens to their first ever Stanley Cup. He led the playoffs in goals as well. He remained with Montreal through the formation of the NHL and into 1923. In the 1919 Stanley Cup playoffs, which were never completed due to the influenza epidemic, he led the playoffs in points. By 1921, the Canadiens had so much depth at forward, and an opening on defence due to the death of future Hall of Famer Joe Hall in the influenza epidemic, so they decided to try Pitre as a defenceman; not as difficult a transition as one might think, because he had previously been a "Rover" during the days of "seven man" hockey. At age 38, Pitre first regularly played as a defenceman. He played defence for his final two seasons before retiring. Last seasons Pitre with the Canadiens, circa 1921–22.

Pitre played essentially his entire career as a forward. He played his final two seasons, probably his least effective seasons, as a defender. The seasons where he performed the best were seasons he played right wing. Pitre was a good scorer. If a defenceman twice led major hockey leagues in points, while playing a long career like Pitre did (~20 years) he would be one of the all time great defenders. If a player plays 18 years as a forward twice leading major leagues in points and then hangs on for two final years as a defender, he is a good player. Pitre was inducted into the Hockey Hall of Fame in 1962 to show this.

Didier Pitre was also a member of the great line called "The Flying Frenchmen" alongside of Jack Laviolette and Edouard "Newsy" Lalonde.[3]

In a January 16, 1919 game against the Ottawa Senators, Pitre, with the Montreal Canadiens, and Jack Darragh, of Ottawa, each had natural hat tricks in a 10-6 win for the Canadiens. That feat was not repeated until Jonathan Cheechoo, with the San Jose Sharks, and Ryan Smyth, Edmonton Oilers, each did in a 6-4 Edmonton victory on October 19th, 2006.[1]

Is Didier your ancestor? Please don't go away!

ask our community of genealogists a question.
Sponsored Search by Ancestry.com
DNA Connections
It may be possible to confirm family relationships with Didier by comparing test results with other carriers of his Y-chromosome or his mother's mitochondrial DNA. However, there are no known yDNA or mtDNA test-takers in his direct paternal or maternal line. It is likely that these autosomal DNA test-takers will share some percentage of DNA with Didier: 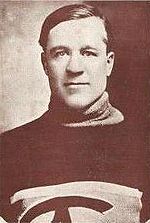 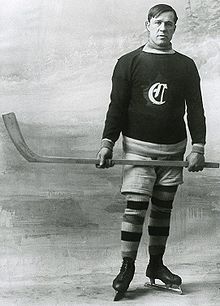 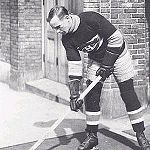