Jane Ann Pitts was born about 1839. She was the daughter of James Pitts and Anne Tweedie.


Benalla Standard (Vic.): Tuesday 7 October 1902
MANSFIELD. On Tuesday last James H. Pitts, one of the oldest travelling compositors in the state, died at the local hospital from a complication of complaints, heart failure being the immediate cause of death. We have known him for nearly 30 years, and during that time he has travelled all the colonies, with the exception of Western Australia. Although he could have settled down independently in the old country many years, he would not do so, preferring a roving life, knowing no restraint. He has a brother and sister in this state, and sister in America, filling high positions. In his younger days he was a violinist of some note. His remains were interred in the local cemetery, his brother in Melbourne defraying all expenses. Poor Jim, may his soul rest in peace, says the "Courier." "Amen," says the "Standard" staff.[1]

A poster, scanned in 3 parts ( badly cropped so part is missing), printed in Canada, By the Rev. Henry Bool, undated, from the Watmuff Trunk, has a note stating "Your Uncle Bool living in Canada (Married my only Sister Jane Anne Bool. (signed) Bessie Watmuff"

On the back, poorly written penciled note by Bool, says


"My lectures are given monthly in connection with ?church?  ?mtunh? of Bapt[ism]
?butco dark? and Presbyterian, dwelling pro[vided]
I have the opportunity of preaching fo...
Pastors of some of the best Churches [in]
the Provinces - on Sabbath."

Find a Grave has more details, her children were born in 1874 and 1881, they will be profiled when citeable and the information is sorted out here a bit more.


1874 Bool, Mary E Halifax, Halifax County - 1955
She was born River Hebert, Cumberland County, Nova Scotia, 20th August 1874, Died 1955-12-10 aged 81years 3 months 20 days, where she had been resident 9 years at the Old Ladies Home, 528 Gottingen St., Halifax, (having formerly lived at Truro). (The year 1856 on the headstone disagrees with the paperwork.) She died of carcinoma of pancreas (suffered 1 year) and cirrhosis of the liver (suffered 8 months).[7] She is buried with her parents in Truro, Nova Scotia.

ask our community of genealogists a question.
Sponsored Search by Ancestry.com
DNA
No known carriers of Jane's DNA have taken a DNA test. 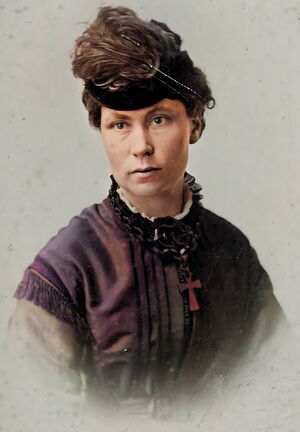