You can read an excellent biography of Henry, 3rd Earl of Lancaster, at English Monarchs.

Henry ( Plantagenet) was born about 1281 at Grosmont Castle, Monmouthshire. He was the son of Edmund Earl of Lancaster (son of Henry III King of England) and his 2nd wife, Blanche d'Artois, widow of Enrique 1, King of Navarre.[1]

The following children were also included in this profile, with no specific source:

(Royal Ancestry) Sir Henry of Lancaster and Leicester, Lord of Monmouth, died 22 Sept. 1345, and was buried with great state on the north side of the high altar of Newark Abbey, Leicester, Leicestershire, 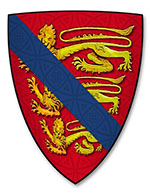 Leave a message for others who see this profile.
There are no comments yet.
Login to post a comment.
Kerry Larson
It appears that the non-inline sources need to be cleaned up. Some are before inline references, most after; some in non-numbered list, some not.
posted May 15, 2017 by Kerry Larson

Vic Watt
Henry of Lancaster and Matilda/Maud Chaworth are known to have had seven children. The Wikitree profile shows an additional four children:

I can find no source for these children as being the children of Matilda/'Maud, and I can't find evidence of illegitimate children. I propose to disconnect them from Henry and Matilda/Maud.

Vic Watt
I am going through and trying to find (several) cites for every fact.
posted Jul 23, 2015 by Vic Watt

Eric Daly
Alix de Joinville was the second wife of

Lindsay (Stough) Tyrie
This profile is a work-in-progress. Under the developing rules on historically-significant ancestors over 300-years-old supervisors are doing expedited merges. We need one manager to take primary responsibility for each profile. Management rights and/or trusted status may be terminated per policy. Please see http://www.wikitree.com/wiki/Historically-significant_ancestors for more details. Please feel free to contact me with any questions as well. Thanks!
posted Feb 20, 2012 by Lindsay (Stough) Tyrie

Henry is 24 degrees from Mary McCauley, 26 degrees from B. W. J. Molier and 7 degrees from Henry VIII of England on our single family tree. Login to find your connection.