Named after his place of birth, he was called Edward of Woodstock in early life. Since the 16th century, he's been known as "the Black Prince."[5] His victories at the Battles of Crécy and Poitiers made him popular during his life.

Edward of Woodstock was invested as the second Prince of Wales on 12 May 1343. This title has since been bestowed on the heir apparent to the English throne. It is not a hereditary title and must be re-granted each time for each new heir apparent.

Controversy regarding paternity: A 2014 Y-DNA study compared the DNA of Edward III’s descendants, namely Richard III and 5 men descended from Henry Somerset, 2nd Earl of Worcester. [6] Richard III descended in the male line from Edward’s son Edmund of Langley, and Henry Somerset descended in the male line from Edward’s son John of Gaunt. The Y-DNA did not match. The press sensationalized the announcement to suggest that Edward III might not be the father of Edmund of Langley or John of Gaunt, or even of his other children. [7]

However, this is an extremely poor analysis of the data. Certainly, there was a non-paternal event(s) somewhere in the line down to his gr-gr—grandson Richard III, or somewhere in the 24 to 26 generation descent in the Somerset lines. It is not possible to tell where the non-paternal event occurred from this study. At this point, all the children of Philippa of Hainault must be presumed to be the children of Edward III, King of England.

Married: Joan of Kent, daughter of Edward of Woodstock and Margaret Wake, in a clandestine ceremony in the spring of 1361. After receiving a papal dispensation date 7 September 1361 the had a formal ceremony on 6 October 1361 at Windsor Castle in Berkshire, England. [1]

Children of Edward of Woodstock and Joan of Kent: [1]

Children of Edmund of Woodstock and Margaret Fleming:

Additional illegitimate children: Richardson gives Roger de Clarendon as the only illegitimate child of Edward of Woodstock. He is extremely well-documented and occurs in many primary records. The wikipedia page for Edward gives three additional children which are not properly documented. These three should be considered possible/unlikely children until sources can be found to prove or disprove their existence:

(Royal Tombs of Medieval England) Edward, the eldest and most celebrated of the sons of Edward III and Philippa of Hainault, died at Westminster on 8 June 1376, following years of illness. The prince's will dated the day before his death instructed his burial in 'l'eglise cathedrale de la Trinite de Canterbire'. Canterbury had no tradition of royal burial, but housed the relics of one English saint with international appeal, Thomas Becket. The chapel containing Becket's shrine was dedicated to the Trinity. The prince was born on Trinity Sunday and died on it. As early as 1363 Edward had founded, with his wife, Joan of Kent, two chantries in the crypt beneath the Trinity Chapel. Edward's will instructed his burial in a crypt ten feet before the altar of the Chapel of Our Lady Undercroft, a position close to what was thought to be Becket's grave. The will bequeathed various items to the high altar, including Edward's best silver cross and an image of the Trinity. Edward's coffin remained at Westminster until 29 September, before proceeding to Canterbury. The prince's will gave detailed instructions for the procession through Canterbury, with the coffin to be led by two mounted knights wearing the prince's armor. Edward's funeral took place at Canterbury on 5 October, almost four months after his death. Contrary to his instructions, however, the prince was buried not in the crypt beside his chantry but in the Trinity Chapel above, to the south of Becket's shrine. Like Becket, however, the prince was a figure of international renown and the juxtaposition of the two monuments could only have swelled the number of pilgrims to Canterbury. Edward's long illness suggests that the work on his tomb may have begun years before his death with the fairly simple tomb-chest design indicating the tomb was probably completed by 1380. Edward's Canterbury tomb was greatly influential on the way later royal tombs were executed. The effigy was executed in gilt-copper and shows the soldier prince in full armor and military attire with hands clasped in prayer and for the next fifty years English knight effigies were executed in a similar style.

"Here lieth the noble Prince, Monsieur Edward, the eldest sonne of the thrice noble King Edward the third, in former time Prince of Aquitaine, and of Wales, Duke of Cornwall, and Earle of Chester, who died on the feast of Trinitie, which was the eight day of Iune, in the yeare of Grace, 1376. To the soule of whom, God grant mercy. Amen..." [9]

In 1348 he became the first Knight of the Garter, and is also a founder of the Order. Dying a year before his father, his is the first English Prince of Wales not to be crowned. The throne went to his son Richard II, then a minor.[10]

"Edward's ... victories at Crécy, Poitiers, and Nájera eclipsed his failure in Aquitaine, ... he played relatively little part in English politics." He had, "an autocratic manner and an insensitive love of luxury," and is paid, "little attention from serious historians. ... The first to attempt a serious assessment of his career was Joshua Barnes.[11]. Military historians treat him as a major figure, but neither his household nor ... government in Gascony has been fully studied. ... Froissart's depiction of him that has fired the imagination of succeeding centuries, for whom he embodies a golden age of English military feats and of chivalry." [12]

Sponsored Search by Ancestry.com
DNA Connections
It may be possible to confirm family relationships with Edward by comparing test results with other carriers of his Y-chromosome or his mother's mitochondrial DNA. Y-chromosome DNA test-takers in his direct paternal line on WikiTree: 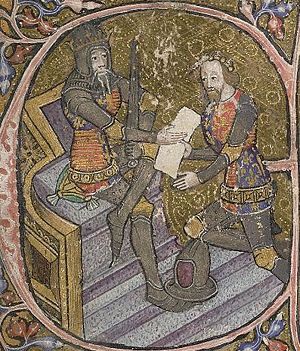 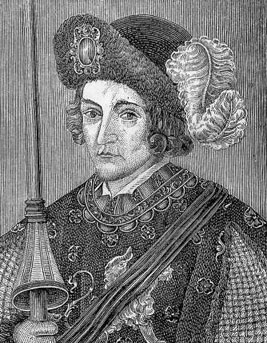 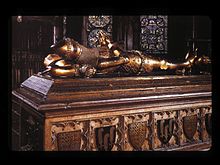 Edward is 21 degrees from Donald Howard, 17 degrees from Julia Howe and 6 degrees from Henry VIII of England on our single family tree. Login to find your connection.

Categories: House of Plantagenet | Knights Companion of the Garter | Battle of Cressy | Battle of Poitiers