Joan (Plantagenet) de Clare is a member of the House of Plantagenet.

Joan was born in Palestine while her parents were on crusade. The seventh child, and second surviving daughter of Edward I and his first wife, she was raised in Ponthieu by her grandmother Jeanne de Dammartin, widow of Ferdinand III of Castile.

In 1278, her father sent Stephen of Penecester and his wife to bring Joan to England. She married twice, and is remembered for alleged miracles at her grave.

Death and burial of Joan of England

(Royal Ancestry) Joan of England died 23 April 1307 and was buried in the Austin Friars at Clare, Suffolk.

Austin Friars in Clare, Suffolk was known as Clare Priory (or Friary) founded in 1248 by Richard de Clare (d.1262), who had the "Honour of Clare" being lord of the area. The priory was the first house of Augustinians in England and was the "mother house" of its 34 priories in that country. The priory was suppressed by Henry VIII in 1538 and fell into disrepair with many buildings lost completely. Some remains of the original priory still exist but the present Clare Priory is a more modern building. There are no records of ancient Clare monuments/tombs and these were probably destroyed following surrender of the priory ion 1538. But the priory does have a tomb attributed to Joan of England & Acre.

Joan died in childbirth at Clare Manor, Suffolk. She was buried "before a concourse of royal and noble personages."

Other notables buried at Clare Priory were Lionel of Antwerp Duke of Clarence & Earl of Ulster and his wife Elizabeth de Burgh. The priory does have a remnant tomb of Lionel, Duke of Clarence and Elizabeth, his wife, in the wall on the south side of the choir.

In 2006 e-mails were exchanged between Alton Rogers and the Rector of Clare Priory who advised of its memorial to Joan of England, Elizabeth de Burgh and Lionel of Antwerp. 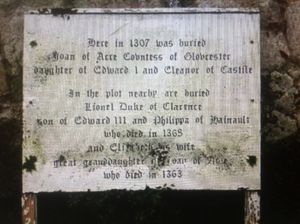 Jo Fitz-Henry
Dear Profile Managers - the England Project would like to co-manage this profile with you to prevent the inadvertent merge with Joan's older sister (also Joan) who died in infancy.

John Atkinson
Plantagenet-1742 and Plantagenet-181 do not represent the same person because: Eleanor of Castile and Edward I definitely had two different daughters named Joan, the first one born about Jan 1265 and died young before 7 Sept 1265. The other was Joan of Acre, born while her parents were on Crusade in Spring of 1271, who married twice. I've updated the profile for Plantagenet-1742 including adding primary sources when I could see them online.
posted May 28, 2021 by John Atkinson

Becky Simmons
Plantagenet-1742 and Plantagenet-181 appear to represent the same person because: I saw that these two profiles, Plantagenet-1742 & Plantagenet-181 were rejected but I can't find where Edward I and Eleanor / Lenora had more than one daughter named Joan, let alone the moniker Joan de Clare or de Mortimer / Morthimer(sp?) I set this up not out of ignorance or to be a nuisance but as there is nothing explaining the rejection nor is it noted, I have seen and spoken with several people that have problems with GED.com uploads because there seems to be profiles that could either be deleted or perhaps one has entered incorrect info on accident and if reviewed they'd find that it matched. Thanks for the consideration and patience here. Happy Memorial Day Weekend! Becky Elizabeth
posted May 28, 2021 by Becky Simmons

John Atkinson
DeClare-106 and Plantagenet-181 appear to represent the same person because: Both daughters of Leonor (Eleanor of Castile) de Castilla, and Edward I of England. Both married to de Clare. These two profiles are duplicates please merge them.
posted Nov 27, 2019 by John Atkinson

C. Mackinnon
Raised this over a year ago. This image is NOT Joan of Acre. Check any costume book. See G2G conversation. The portrait used here thought to be Catherine Howard. Removing image.
posted Nov 25, 2018 by C. Mackinnon

C. Mackinnon
Can someone clarify the portrait? It is TUDOR!
posted Jun 13, 2017 by C. Mackinnon

C. Mackinnon
Can someone clarify the portrait? It is TUDOR!
posted Jun 13, 2017 by C. Mackinnon
[Living Ross]
This from ancestry.com may go along with her:UK and Ireland, Find A Grave Index, 1300s-Current