Richard I (Plantagenet) of England is a member of the House of Plantagenet.

Richard "Lionheart" I of England

Richard I "Lionheart" or Coeur de Lion [1][2] was the son of Henry II 'Curtmantle', King of the English, Duke of the Normans and Aquitanians and Count of the Angevins, and his wife, Eleanor of Aquitaine. He was born on 8 September 1157 at Beaumont Palace, Oxford, England. [1]

Richard spent his youth in France training as a soldier and later fought his father, Henry II.

During the Crusade he captured Cyprus. On the way home, he was taken prisoner in Austria and held ransom. There is a legend that his faithful minstrel Blondel went from castle to castle strumming the notes of his master's favorite melody. Upon reaching the King's prison he was delighted to hear the response from his master's harp. Richard spent only two short periods of his reign in England, the rest of the time he was away on the Crusades or in France.

Richard was on campaign in Chaluz (Chalus - presently located in the Limousin region of France) when he was wounded by a crossbow bolt resulting in his death by blood poisoning. The king's viscera (entrails) were buried locally and his body at Fontevrault, almost 100 miles away, but his heart was buried separately in Rouen Cathedral. This is the first recorded example of a separate royal heart burial, and it appears to have been instructed by Richard himself in recognition of the loyalty of his Norman subjects. [3]

Note on Fontevrault Abbey. Known formally as the Royal Abbey of Our Lady of Fontevraud (or Fonterault) (in French: Abbaye de Fonteraud). It was built in the early 12th century and was then located in what was known as the Angevin Empire. Henry II, King of England, his wife, Eleanor of Aquitaine, and their son, King Richard the Lionheart, were buried here at the end of the 12th century. It was disestablished as a monastery during the French Revolution of the 1790s during which time the royal tombs were disturbed. Fontevraud Abbey, wikipedia

Richard I's heart tomb at Rouen stood south of the high altar and was enclosed by a 'balustrade of silver,' which was melted down in 1250 to help pay the ransom of Louis IX. It was replaced by a stone effigy, which appears in 17th-century drawings showing the main figure with a pillow headrest and lion footrest, and lying on a flat slab supported by four lions. The effigy disappeared sometime after the 1780s and in 1838 an effigy was unearthed south of the Sanctuary together with a lead casket containing the remains of the king's heart. This was identified by an inscription on silver leaf, suggesting the effigy was his. In 1869 Richard's effigy was restored to the south ambulatory together with a tomb-chest, later replaced by a plain plinth. [3]

Sponsored Search by Ancestry.com
DNA Connections
It may be possible to confirm family relationships with Richard I by comparing test results with other carriers of his Y-chromosome or his mother's mitochondrial DNA. Y-chromosome DNA test-takers in his direct paternal line on WikiTree: 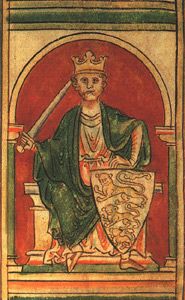 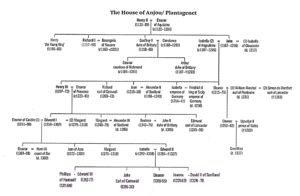 Richard I the Lionheart, King of England

Jo Fitz-Henry
If you are related to King Richard the Lionheart, rather than post it here (where it will get archived), why not tell everybody about it in the "Which castle builder are you most closely connected to?" post on G2G?

Everyone on WikiTree can see it on G2G, and it's permanent so other cousins descended from Richard can find you in future.

You can also get a personalised sticker from the G2G post for your profile biography showing your relationship with Richard. Look in the comments section under the main post (second comment down) for the code.

posted Sep 11, 2021 by Roger Churm
[Living Kelts]
A G2G question has been asked about Richard I's offspring (I think). This profile mentions two illegitimate children, neither of whom are connected, and does not mention the one child who is connected. I just wonder if some additional clarification could be provided on this profile?

Toni Boone
Julie, from what I have read, Philip of Cognac (the early 1180s – after 1201) was an illegitimate son born Philip Fitz Richard ~1181 by an unidentified mother.