Son of Edward III, King of England and Philippa of Hainault. [8] [9]

Though he is always called "John of Gaunt", it is a name he was never called in his own lifetime after the age of three when he received his first title. Gaunt is an English version Ghent where he was born.

Children of John of Gaunt and Blanche of Lancaster:

Children of John of Gaunt and Constance of Castile:

Married: 3rd - John of Gaunt had a well-known illicit relationship with Katherine de Roet, a governess of his children which began around 1372. She was the widow of Hugh de Swynford, knt. of Kettlethorpe and Coleby, Lincolnshire (d. 13 November 1371). They had 4 children born out of wedlock. On 13 January 1395/6, they were married at Lincoln Cathedral in Lincoln, Lincolnshore, England. A papal dispensation was received for this marriage on 1 September 1396. Their children were legitimized by parliament on 9 February 1397/8. [1]

Children of John of Gaunt and Katherine de Roet:

1370-71: During Hundred Years' War, aided Black Prince against France, and established English rule over most of southern France.

1376: Parliament banished Alice Perrers and curtailed John's powers. But the death of the Black Prince and Parliament's dissolution enabled him to regain power.

1386: invaded Castile. Defeated by John I of Castile and León.

Death and Burial of John of Gaunt

From: Royal Tombs of Medieval England. "The fourth son of Edward III and Philipp of Hainault, John of Gaunt married Blanche, daughter and heiress of Henry of Grosmont, Duke of Lancaster, in 1360. She died on 12 September 1368 and was buried north of the choir in the cathedral church of St. Paul's London. Gaunt married Constance of Castile two years after Blanche's death. Gaunt died at Leicester Castle on 3 February 1399. The duke's will, dated the day of his death, instructed that his body was not to be embalmed and should remain unburied for forty days. It was to lie overnight at the Carmelite church on Fleet Street before interment near the high altar of St. Paul's beside Blanche. The year before his death, Gaunt had founded a chantry for himself and his third wife, Katherine Swynford, at Lincoln, and his will endowed two further chantries for himself and his first two wives at St. Paul's (Blanche) and the Church of the Annunciation of St. Mary in the Newarke at Leicester (Constance of Castile). Gaunt's body was taken from Leicester to London, stopping at St. Albans where a Requiem Mass was sung in the presence of Henry Beaufort. The duke was duly buried at St. Paul's on Passion Sunday, 16 March 1399, forty days after his death. His tomb was described at the time as 'sepultura incomparabile'. The tombs of the duke and his duchess Blanche both had effigies. The St. Paul's tombs and chantry were destroyed during the Great London Fire of 1666." [27]

John Of Gaunt, K.G., Duke of Aquitaine and Lancaster, married Katherine De Roet. [In this source he is named in the line of descendant of King William the Conqueror]. 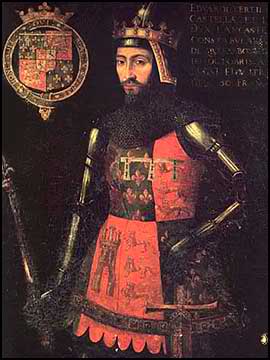 John of Gaunt, 1st Duke of Lancaster by Rs-nourse 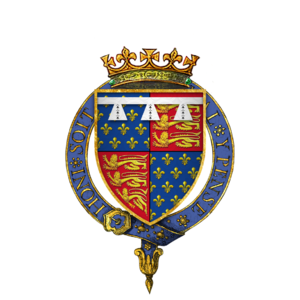 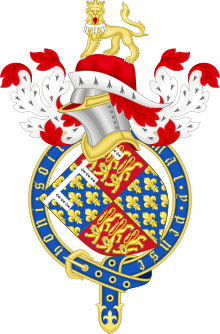 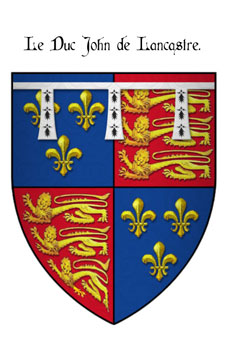 Bruce Trewin
I agree except for the 'Ist Duke of Lancaster'. This distinction was obtained by Henry Grosmont.
posted Apr 28, 2022 by Bruce Trewin

Dale Hankins
the title went dormant when Henry Grosmont died and John of Gaunt was the first once the title was re-established
posted May 03, 2022 by Dale Hankins

Thom Anderson
Someone claiming to be a descendant if John and his mistress Marie de St. Hilaire lead me to look at John's profile here but no mention is made of the alleged mistress or any of their alleged children. A quick web search turned up at least one web site stating these and other assertions (see: http://knight-france.com/geneal/names/1339.htm) but I am curious if there are some acceptable primary sources.
posted Apr 23, 2020 by Thom Anderson

John Atkinson
There is some information about the John of Gaunt's illegitimate daughter Blanche here https://archive.org/details/johnofgaunt001003mbp/page/n527/mode/2up but if you check the profile of her husband Sir Thomas Morieux, his sister was his heir when he died in 1387, so there can't have been any descendants of John of Gaunt and Marie de St Hilaire. Apart from the Beauforts, who were later legitimated, Blanche was his only illegitimate child and there were no other children with Marie de St Hilaire.
posted Apr 23, 2020 by John Atkinson
[Living Horace]
Abstract of Will.
posted Feb 02, 2017 by [Living Horace]
[Living Horace]
Contemporary chronicle (12 MB PDF download), attributed to Thomas of Walsingham, though perhaps not entirely. The root source of many later accounts. In Latin, but summarized in the Introduction.

Greg Hays
Nice bio of one of history's most influential but little known individuals
posted Mar 28, 2016 by Greg Hays