Al Plowman lost his mother just after his eighth birthday. The next blow came when he, his brother Robert and his sister May were placed by their dad in the St. Louis Protestant Orphan Asylum at 330 N. Gore Ave., Webster Groves, Missouri, on July 30 1890.

Hannah Plowman was still a young woman when she was struck with a sudden illness that led to a brain infection which caused her death. George Plowman decided the orphanage was preferable to trying to keep the children at home in the care of their maternal grandmother, Dora Dohrendorf, who was living with the family at the time of her daughter's death.

The children stayed in the orphanage, then located in a rural part of St. Louis County, until February 3, 1892. They were finally able to return home after George remarried. Al rarely spoke about his childhood to his daughters so it's fair to surmise that many of his memories from that time were painful. 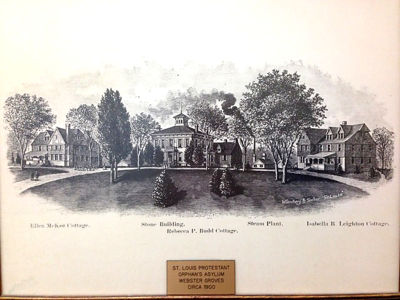 A highly literate man, Al would have loved to have the opportunity of higher education, but the 1940 federal census indicates that he finished his formal education at the end of 8th grade because his family needed whatever income he could earn. At the age of 17 the Gould's St. Louis city directory lists him working as a clerk for the Tennent-Stribling Shoe Company. He moved up in the business world, eventually becoming the assistant sales manager for the National Oat Co. in St. Louis. He later worked in sales for the International Accountant Society.

Creative writing was his first love. He was not able to support his family on his income from writing but he had many short stories published during the early 20th century in pulp fiction magazines such as 'The People's Ideal Fiction Magazine' [1]. Al proudly kept all his published short stories in an album, along with letters he received from editors and others and the title pages and covers for every magazine in which his work appeared. His grandchildren have republished all of Al Plowman's short stories.

Jessie Leister and Al got married in 1903 in Alton, Illinois. Al and Jessie had two daughters, Marian and Rosalind. Then tragedy struck when Jessie died of ptomaine poisoning while the girls were very young. After Jessie’s death, Al and his daughters lived with his parents-in-law, Jacob and Mary Leister..

Al met his future second wife, Grace Thonssen, through his daughter’s school—Grace was Marian's teacher. They became engaged over the objections of Grace's family, which was German-American and not enthusiastic at the prospect of their daughter marrying a man with an English-born father on the eve of World War I. Evidently Grace's family wasn't told that Al's mother was of German ancestry.

Al and Grace got married in October of 1916, shortly after Grace's mother died of a sudden bout of gastritis. Al's daughters stayed behind with their maternal grandmother rather than moving in with the newlyweds. The reason for the girls remaining with their grandmother was that it was "Grandma" Leister's strong preference to keep them with her. However this was seen to some extent by Marian and Roz as an abandonment by their father. Hard feelings persisted for some years.

When Al's father died in 1921 in Cedar Rapids, Iowa, Al paid on installment the costs associated with the burial of George Plowman, who evidently died penniless. Al's half sister Sally took care of the arrangements in Cedar Rapids. Apparently no one else in the family had the funds to assist. It took Al a year and a half (at a time when he had one young daughter and another on the way) to pay off the debt.

Al and Grace had two daughters, Lois and Aline. The family moved from St. Louis to Chicago in 1927 when Al got a job promotion to sales manager of the International Accountant Society. In 1931 Al gave up his job in order to start his own business—a franchise store selling "Sparklets" products (nozzles that injected pressurized gas into water to make it carbonated). Al’s business, located on La Salle Street, was under-capitalized from the start. The Sparklets company did not provide the support it had promised and the business quickly went bust.

Grace never really forgave her husband's error in judgement. (In fairness, it probably reminded her of her father's devastating loss of his business during her childhood). Though he was able to return to work at the International Accountant Society, Al was not able to get his old job back but instead had to take a demotion to a salesman job. To add stress to the situation, Al's daughter, Roz, came to Chicago from California during this time to ask Al for a loan because her husband was having financial problems. Al told Roz frankly that he had no cash to spare. It left Roz with angry feelings for her dad.

By World War II sales of accountancy courses were dwindling and Al was seriously in need of a better source of income. In 1942 the family returned to St. Louis where he searched in vain for a better paying job. Fortunately three of his four daughters were doing quite well by then. Lois found a good job working as an assistant to a publisher and his younger daughter, Aline, joined the Navy as a WAVE. Oldest daughter Marian had married successful businessman, Tom O'Brien, and she was becoming a well known food writer in St. Louis. Ultimately Marian would become the food editor of the St. Louis Globe-Democrat and Lois would be the advertising manager of the prestigious Lammert's Furniture Company, a well established St. Louis business founded in the 19th century.

Roz joined the family in St. Louis for awhile during this time. She claimed her husband had died but it later turned out he was in jail for kiting checks. Roz had an affair with a local doctor and became pregnant. She returned to California to have the baby. By then her husband was out of prison and the child, Barbara, was given the Broderick surname.

After the war ended, Al did some door to door sales, but he didn’t have much success. Years later Aline recalled that this was a difficult time, financially and emotionally, for the family. In addition, Al's only brother, Bob, died in Florida without ever returning to St. Louis.

Eventually Al got a job working for his son-in-law, Tom O'Brien, who had started a successful janitorial products company in St. Louis during World War II. Al also tried to sell the options to his short stories for televsion screenplays in the 1950s (TV was the new thing!) but he had no luck with that. Money was tight and Al worked for Tom until he had his first stroke in 1957. Health problems from this stroke forced him to retire. By then he had put in enough work time with Tom's company to qualify for social security,. This was an enormous help to Al and Grace as they entered old age. Having given up his pension when he started his Sparkletts business, Social Security and later, Medicare, gave the Plowmans some security and dignity as they entered old age in a rapidly changing world.

Al recovered enough from his stroke to help his daughter Aline and her husband renovate an older home they had purchased in University City, Missouri in 1958. He and Grace also helped care for their grandchildren. Another series of strokes slowed him down in the mid-1960s. A massive stoke caused his death just before Christmas in 1970.

Al Plowman is remembered by his family with love and admiration. He was that rare man who truly "pulled himself up by his bootstraps" and did whatever he could for his family. Neither rich nor famous, he had a long and interesting life.

Read about the death of Al's sister: http://capturedandexposed.com/2020/02/07/family-secrets/


Memories: 1
Enter a personal reminiscence or story.
Shayne Davidson
Alfred and his brother Robert and sister May were placed in the Portestant Children’s Orphan’s Asylum at 330 N. Gore Ave., Webster Groves, MO on July 30 1890 by their father after the death of their mother. The children stayed until Feb 3, 1892 when they were removed by their father after his second marriage. This facility cared for boys and girls of all religions. The age limits for boys 2-1/2 to 11 years, and for girls were 2-1/2 to 16 years. The orphanage was formerly in St. Louis and moved to a 50-acre farm in Webster Groves. The name was changed to Edgewood Children’s Center after merging with other facilities.

The records are very old books which in 2000 were are stored at the Mercantile Library at the University of Missouri-St. louis.

Notes from the daybook of the St. Louis Protestant Orphan’s Asylum 1889-1894 Transcribed by Shayne Davidson, July, 2000.

Fri. Nov. 7 Robbie Plowman was quite sick with indigestion. Gave him a dose of castor oil and the consequence was I was up all night with him.

Sun. Nov. 16 Mr. Martin and Plowman were out to see their children.

Tues. Dec 23 The three Plowman children left us for a Christmas visit.

Mon. Jan 12 The Plowman boys are miserable look quite badly + yet are not sick enough for bed.

May 10 Mr. Plowman returns his child who has been out for a months visit. May said she was glad to get home again. In fact she said she frequently wanted to come back before he brought her.

June 21 Mr. Sender, Plowman …all came to see their children or friends.

June 28 Mr. Plowman …all came to see their children or friends.

Sat. July 4 The children all had firecrackers as Mr. Martin came out with a big basket full and gave every boy whose parents or friends had not given him firecrackers some. So from ten o’clock until about six we had popping and snapping. Then in the evening Mr. Plowman and Martin together with the teacher and Mr. Carroll + others went over to the pond pasture and the two men set off about eight dollars worth of fireworks which they had brought to the satisfaction of the children.

July 19 Mr. Plowman …out to see their children.

July 26 Mr. Plowman …were out to see their children.

Sept. 13 Mr. Martin + Plowman came out on the four train.

Oct. 4 Mr…Mr. Plowman …all to see their children.

Oct. 11 Sun. A great number to see their children. Of course Mr. Plowman.

Nov. 1 Mr…Mr. Plowman …all were out to see their children.

Dec. 6 Mr. Plowman …out to see their children.

Dec. 24 The Martins, … all went to town. Also May Crawley and Plowmans. May to stay.

Jan. 17 Mr. Plowman will remove his children the second of Feb. He is married and will then be housekeeping.

Creative writing was Al's first love though he was not able to support his family on his income from writing. He had many short stories published during the early 20th century in 'pulp' fiction magazines. Here is a partial list: Here is only a partial list of his stories:

posted 26 Sep 2011 by Shayne Davidson
Login to add a memory.
Is Al your relative? Please don't go away!

ask our community of genealogists a question.
Sponsored Search by Ancestry.com
DNA Connections
It may be possible to confirm family relationships with Al by comparing test results with other carriers of his Y-chromosome or his mother's mitochondrial DNA. However, there are no known yDNA or mtDNA test-takers in his direct paternal or maternal line. It is likely that these autosomal DNA test-takers will share some percentage (beta) of DNA with Al: 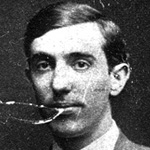 George Robert Plowman with his sons 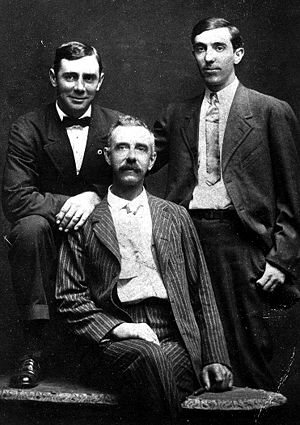 Marian Maeve O'Brien with her dad and sister 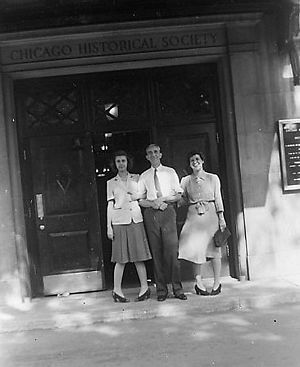 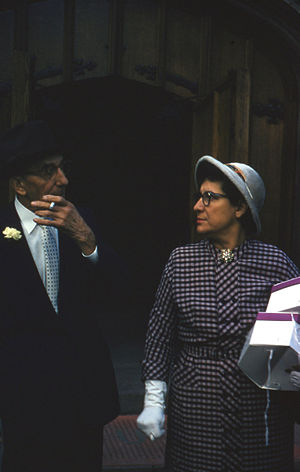 Grace and Al on the Meremec River 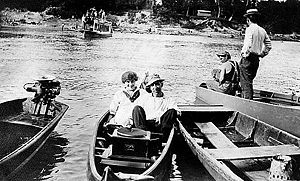 Paula (Hawkins) Reinke
Please note there is a Suggestion 863 that needs your attention. More information on how to correct can be found at: