Sam Poo was an Australian Bushranger

The discovery of gold in Australia brought an influx of new arrivals from overseas the Chinese were particularly attracted to Australia's goldfields, and were known for their persistence and ethic of hard-work. Whilst most Chinese stayed together, occasionally an individual would break form the crowd and exlore other options for earning a living. Sam Poo turned up late 1864 at the Talbragar gold diggings he was a loner who mixed with neither whites nor Chinese there were rumours that he had been a Chinese laundryman in Sydney.Sam Poo set up a tent on the outskirts of the field and walked around the area a lot he was nicknamed “Cranky Sam” due to his surly manner one resident of Chinatown said “Him no good. Him bad man – no like”.

In January 1865 Sam Poo left Talbragar two days later ten Chinese prospectors left the Talbragar diggings and set out along the Mudgee Road Sam Poo bailed them up at pistol point he relieved them of their small calico container filled with gold dust that they had concealed under their pigtails.

Sam Poo continued to do hold-ups, but he selected solitary wayfarers on foot, both Chinese and whites on 8th February 1865 he attacked and raped a woman, holding her a prisoner all day when nigh came he let her go then he disappeared Trooper John Ward set out alone on 10th February 1865 dressed as a civilian on foot he came upon Sam Poo who suddenly dived into the bush and ran after a long chase Trooper Ward caught up with him at a deserted goldfield known as Barney’s Reef there Trooper Ward was shot in the chest.

Sam Poo took Ward’s weapons and ran off into the bush Ward lay there all day and night it wasnt until the next day the station owner James Plunkett who was riding by found him. Trooper Ward gasped out what had occurred before whispering “Take care of my wife and children” with his dying breath.A widespread manhunt was swung into action with armed and mounted posse-men from as far away as Bathurst joining in. For two weeks they looked but couldnt find him then a blacktracker named Harry Hughes volunteered his services. Early on the morning of 15th February 1865 he was taken to the site of the murder where he quickly picked up the trail of Sam Poo he led the troopers to a place about 6 km away where they found the Chinese bushranger.

There was a gun fight for several hours until Trooper Todd shot Sam Poo in the thigh he fell but continued to fire from the ground. They rushed him but Harry Hughes reached him first he clubbed the bushranger with his rifle butt breaking the stock and fracturing Sam Poo’s skull.Sam Poo was taken to Mudgee hospital under guard he was in a bad way Doctors tended him and after nine months he was taken to Bathurst for trial after being found guilty of Trooper Ward’s murder he was hanged at Bathurst Gaol on 19th December 1865.

ask our community of genealogists a question.
Sponsored Search by Ancestry.com
DNA
No known carriers of Sam's ancestors' DNA have taken a DNA test. 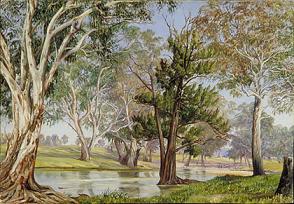 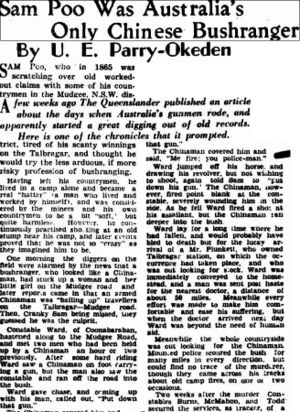 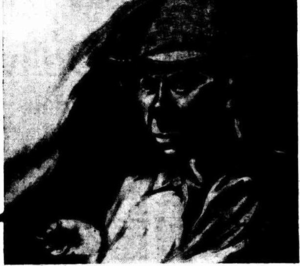 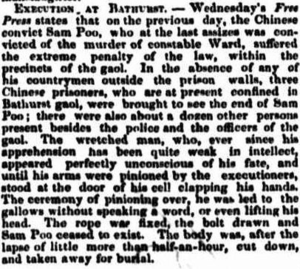