Nicholas Pool
Born before 1773 in Province of North Carolina

Nicholas Pool was born in 1765. More and better sources are needed to fully establish Nicholas' father.

1795 - Tax Record, Chatham Co, NC. Nicholas Pool is recorded with no land, one white poll, no black polls, no town lots, no stud horses, and no carriage.

Land Sale 10 AUG 1801 Warren Co, GA · Note: Nicholas Pool sold 50 acres of land on Williams Creek to William Locket for $130, 10 Aug 1801, witnessed by William Chapman, William Smith. This record implies that Nicholas was over 21 years of age at the time and was therefore born before 1780.

06 DEC 1825 Baldwin Co, GA · The final division of the estate of Nicholas Pool dated 6 Dec 1825 stated, We the undersigned appointed to make division certify personal estate to amount of $2617.55, of which we have allowed to Mrs. Nancy Pool $226.27, the amount for which 2/3 of the land will make $2470.67, of which we have divided into 8 parts as follows: Labon C. Pool, W. W. Pool, John McMurrain, Milly F. Pool, Lucinda Pool, Tabitha Pool, and Matthew H. Pool. The marriage of Lydia Pool and John McMurran, combined with the fact that John McMurran received a share of the estate of Nicholas Pool, demonstrates that Lydia was the daughter of Nicholas.

Note: the above year of death appears to be in error, 1824 would appear to be the correct year. Estate settlement for Nicholas Pool, deceased, 1822 in Baldwin Co, GA (son Laban Pool, Administrator), before moving to Muscogee County, Georgia. [5] Parts of the ECC Poole line are known to have generally similar migration patterns, from Elizabeth City County VA to Wake, Johnston, and other counties of NC. (from here, some of the NC migrants went back to VA, while others either remained in NC, or migrated to to a series of southern states including SC, GA, MS, AL, and a number ended up in Texas.

Although there remains risk of error, we are going ahead and modifying the profile to show the Nicholas - Nicholas father - son connection,


There are a number of supporting reasons for this. Nicholas Pool Sr is documented to have a son named Nicholas. "Nicholas" is a rare given name in this line of Poole /Pool. The near identical Y DNA between Nicholas Pool Sr descendants and Alexander Pool Sr, is strongly indicative of close relations. Both of these line tie to Thomas Pool, Sr, son of John and Jane Pool, and grandson to David Pool. None of these reasons constitute a solid proof, but the combined weight of the three supports is strong.

Several persons including Glen Pool, who are known descendants of Nicholas Pool have had their Y DNA tested. These results are available at YSEARCH.ORG and Familytreedna.com. They absolutely prove that Nicholas Pool is NOT descended from Pettypool as many previously believed. There is now sufficient research on the Y DNA Haplogroup G1 Poole / Poole line that from DNA of descendants, we can be confident that Nicholas descends from the Elizabeth City County line of Poole / Pool ("the ECC Poole line which dates back to approx 1620 immigration of David Poule / Pool).

Y Chromosome DNA results of direct male descendants has confirmed this to be a "Y Haplogroup G1 Poole / Pool" descendant. This line has been demonstrated with clear and complete documents to be descended from the Eliabeth City County VA line of Poole / Pool which began with David Poole who immigrated to VA in about 1619.

wtp inserted note: several persons including Glen Pool, who are known descendants of Nicholas Pool have had their Y DNA tested. These results are available at YSEARCH.ORG and FamilyTreeDNA.com. They absolutely prove that Nicholas Pool is NOT descended from Pettypool as many previously believed (and as a number of researchers continue to show despite clear DNA proof to the contrary), Strong evidence is that Nicholas descends from the Elizabeth City County line of Poole Pool ("the ECC Poole line which dates back to approx 1620 immigration of David Poule Pool).

ask our community of genealogists a question.
Sponsored Search by Ancestry.com
DNA Connections
It may be possible to confirm family relationships with Nicholas by comparing test results with other carriers of his Y-chromosome or his mother's mitochondrial DNA. Y-chromosome DNA test-takers in his direct paternal line on WikiTree: It is likely that these autosomal DNA test-takers will share some percentage of DNA with Nicholas: 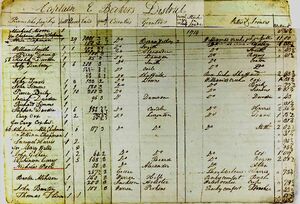 William Pool Jr
Melanie -- I thought the "FindAGrave" info to be questionable , however I think "good practice" is to list all references you find - I have seen a number of entries in FindAGrave where burial site is not known or is speculative.

Also some info from find a grave is speculative and almost certainly wrong -- for example since descendants have tested as Y haplogroup G (or F2885) he cannot have been a Pettypool--ALL OF THE Y HAPLOGROUP G POOLE /POOL LINE ARE KNOWN TO BE DESCENDANTS OF DAVID POULE POOL WHO IMMIGRATED TO VA 400 YEARS AGO (1620). Here is my source Reference Note: findagrave.com and Nicholas Pool Nicholas Pool Birth: 1765 Death: 1822 Baldwin County Georgia, USA Burial location not known, but as Nicholas died in Baldwin County, Georgia, it is supposed he is interred there.

It is said this surname was shortened from PETTYPOOL. Son of John & Millie (UNKNOWN) POOL. Married ca. 1788, probably in North Carolina, to Nancy CHAPMAN. Father of at least eight children. (WTP NOTE: this from find a grave is almost certainly wrong. Descendants of Nicholas Pool have tested as Y haplogroup G1 or G(F2885) using terminal SNP terminology.

This family migrated from Virginia through North Carolina to Georgia. Estate settlement for Nicholas POOL, deceased, 1822 in Baldwin Co, GA (son Laban POOL, Administrator). According to a letter from Mary (LAND) HOOD SANDS to Mrs. J. F. NEEL of Palastine, TX (1966), Thomas A. POOL married 1830 in Monroe County, Georgia, to Martha BREWER, whose sister Mary BREWER married a RODGERS (who?); also mentions that the ANTHONY family were in Monroe County as well, before moving to Muscogee County, Georgia.

William Pool Jr
Pool-4 and Pool-1776 appear to represent the same person because: same person, some differences in data to be resolved