He was known as "the Farmer King" and "the Poet King". He was the eldest son of King Afonso III of Portugal by his second wife, Beatrice of Castile, and grandson of king Alfonso X of Castile (known as "the Wise").

His marriage to Elizabeth of Aragon, who was later canonized as a saint of the Roman Catholic Church, was arranged in 1281 when she was 10 years old.

King Dinis I ordered the planting of a large pine forest (that still exists today) near Leiria to prevent soil degradation that threatened the region and as a source of raw materials for the construction of the royal ships. He was also known as "The Farmer King".

Ancestor of Richard of York

Is Denis your ancestor? Please don't go away!

ask our community of genealogists a question.
Sponsored Search by Ancestry.com
DNA Connections
It may be possible to confirm family relationships with Denis by comparing test results with other carriers of his Y-chromosome or his mother's mitochondrial DNA. Y-chromosome DNA test-takers in his direct paternal line on WikiTree:

Images: 1
Denis of Portugal and Elizabeth of Aragon 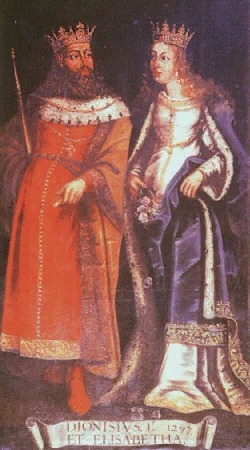 Leave a message for others who see this profile.
There are no comments yet.
Login to post a comment.
[Living Sälgö]
.
posted Oct 09, 2016 by [Living Sälgö]