American impressionist painter. He is known for his paintings of people at leisure in Central Park, and on the beaches of New York and New England.

Starting in 1870 he studies art at the McMicken School in Cincinnati and in 1873 he starts working at the Strobridge Lithography Company. From June 10, 1879 to March 9, 1881, Potthast studies under Thomas Satterwhite Noble. Potthast later studies at the Royal Academy in Munich. After returning to Cincinnati in 1885 he resumes his studies. In 1886, he departs for Paris, where he studies with Fernand Cormon. In 1895 he relocates to New York City.

Until the age of thirty-nine Potthast earns a living as a lithographer. The purchase of one of his paintings by the Cincinnati Museum of Art may have encouraged him to abandon lithography for a career as a fine artist.

By 1900, Potthast is living in New York County, New York, United States.[4][5] He works as a magazine illustrator, and exhibits regularly at the National Academy of Design, the Society of American Artists and the Salmagundi Club, winning numerous prizes. By 1908 he is installed in a studio in the Gainsborough Building. 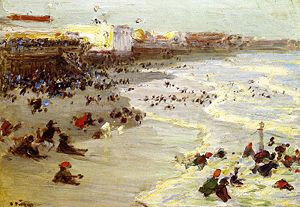 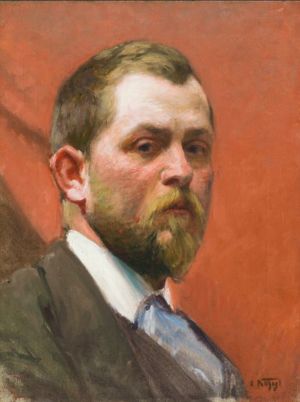 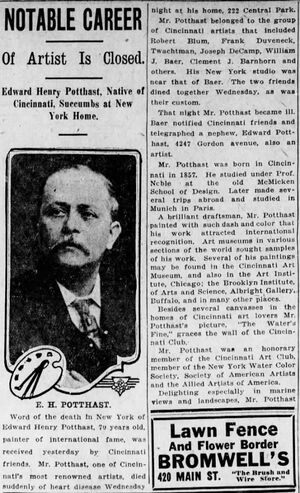 Leave a message for others who see this profile.
There are no comments yet.
Login to post a comment.
[Living Sälgö]
Map displaying the locations of some of his artworks