Powell was the son of Jamaican immigrants Luther Powell and Maud McKoy. He was raised in the South Bronx and educated in the New York City public schools, graduating from Morris High School in 1954.[1]

He graduated from the City College of New York in 1958. While at the college he joined the Reserve Officer Training Corps and received a commission as second lieutenant upon graduation.[2]

After graduation in 1958, Powell was commissioned as a second lieutenant in the U.S. Army. While stationed at Fort Devens, Massachusetts, Colin Powell met Alma Vivian Johnson of Birmingham, Alabama, and they married in 1962. [3] The couple has three children: son Michael, and daughters Linda and Annemarie.[1]

After basic training at Fort Benning , Georgia, he embarked on a military career that took him to operational and command assignments in the United States, Germany, Vietnam, and Korea and culminated in his appointment as the first black officer to hold the nation’s highest military post. [4]

He died on 18 October 2021, and was buried at Arlington National Cemetery in Arlington, Arlington County, Virginia, USA.[5]

In 1987, Powell became national security adviser, a post he held for the duration of the Reagan administration. While there, he coordinated technical and policy advisers during Reagan's summit meetings with Soviet President Gorbachev and his conferences to topple the pro-Communist Sandinista government in Nicaragua. [1]

Chairman of the Joint Chiefs of Staff

In 1989, President George H. W. Bush appointed General Powell as Chairman of the Joint Chiefs of Staff. The post is the highest military position in the Department of Defense, and Powell was the first African-American officer to receive that distinction. General Powell became a national figure during Desert Shield and Desert Storm operations in Iraq. As chief military strategist, he developed what became known as the "Powell Doctrine," an approach to military conflicts that advocates using overwhelming force to maximize success and minimize casualties. [1]

In 2000, President George W. Bush appointed Powell Secretary of State, and Powell was unanimously confirmed by the U.S. Senate. At that time, this was the highest rank in civilian government ever held by an African-American. [1]

Powell’s books include It Worked for Me: In Life and Leadership (2012; written with Tony Koltz) and the autobiography My American Journey (1995; written with Joseph E. Persico),[6] in which he acknowledged that his people were originally slaves in the Government House in Jamaica and that one of them had a liaison with Sir Eyre Coote, from whom he claimed descent.[7]

Is Colin your relative? Please don't go away!

ask our community of genealogists a question.
Sponsored Search by Ancestry.com
DNA
No known carriers of Colin's DNA have taken a DNA test. 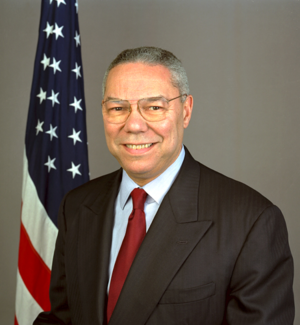