The following was reported in the Daily Northwestern:

Mankato, May 26 [1893] — The house of Frank Manaige at St. Clair,
fifteen miles from this city, was burned yesterday, and two
of his children, a nine-year-old girl and a two-year-old boy,
were burned to a crisp, the remainder of the family having
narrowly escaped. One child was dropped out of a second-story
widow and saved, and Mrs. Manaige saved herself by jumping
from a second-story widow. She remained in the burning house
in search of her missing children until almost overcome by smoke,
and was forced to leave. The fire originated from a gasoline stove
which the older daughter was attempting to light.

ask our community of genealogists a question.
Sponsored Search by Ancestry.com
DNA
No known carriers of Nellie's ancestors' DNA have taken a DNA test. 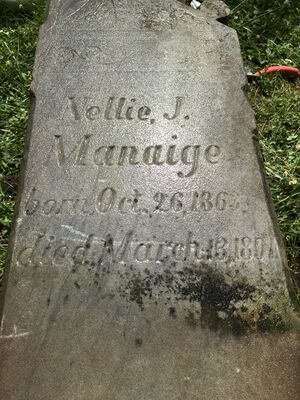