Pocahontas (Powhatan) Rolfe is a Qualifying Ancestor of the Jamestowne Society

Pocahontas was a Native American woman with an incredible amount of mythology surrounding her. Her legacy as a positive influence on early settlers of the Southern United States Colonies remains popular today.

Pocahontas was born about 1596, based on her telling her portraitist in London that she was in her 21st year in 1616.[1] [2] She may have been born in the Werowocomoco Village on Pamunkey River, Tsenacomoco, present-day Gloucester County, Virginia, but the exact location of her birth is not known. Her father was Wahunsenacawh Powhatan.[3][4] Her mother's name was not recorded by either John Smith or John Rolfe.[1] Pocahontas was known as one of the Chief's favored daughters. They shared a loving, respectful relationship.[3][4]

At birth, Pocahontas was given the name Amonute.[4][5] She later took a secret name, which she did not reveal until after her marriage and conversion to Christianity, which was Matoaka.[3] Matoaka is considered the name given to Pocahontas at birth, though, by some oral Native American histories, and may have meant "flower between two streams."[3] The name by which she is best known, Pocahontas, was her childhood nickname, loosely translated as "playful one", "little wanton", or "laughing, joyous one", due to her curious nature.[1][3]

The incident Pocahontas is best known for involved the nearly as famous Captain John Smith.[3][4] The story Smith gave versus the one the Native American histories give vary a bit.

According to Smith, In the winter of 1607, when Pocahontas was only around 11 years old, John was captured by her brother. In a scene where he believed he was in danger of being executed, Pocahontas stepped forward and offered her life for his, saving him. Native American histories indicate that he was not in danger, but rather was being initiated as another Brother. A later letter of John Smith's also seems to support this, indicating a meal and interview, nothing dangerous. They also claim that Pocahontas would never have been at such a ceremony, due to her age, but a meal in her father's abode she very likely would have helped serve.[3][4]

The story has been examined for centuries, and no one knows for certain the truth, but it did procure a place for both Pocahontas and John Smith in United States' mythology and history.

Following the incident, Powhatan informed Smith that he was part of the tribe, and proceeded to trade with him. Powhatan also sent gifts to the Jamestown settlement, which was starving in the winter conditions. Pocahontas served as a symbol of peace to the colonists, and would visit Jamestown frequently, playing with the children there.[3]

Despite what transpired, the relations would deteriorate, as the English became more demanding and less grateful. Smith claimed Pocahontas would again save his life, warning him of Powhatan's plot to kill him, which prompted him and his companions to leave. But, Native American history dictates Pocahontas, being as young as she was, wouldn't have knowledge of such a plan, and certainly wouldn't have made it as far as where Smith was without someone's guards knowing she was about.[3][4]

There are legends that Pocahontas and John Smith had a child named Peregrine Smith. No reliable evidence has been found for this, which is discussed in more detail on Peregrine Smith's profile.

An Englishman, William Strachey, was in Jamestown in 1610 and lived there for about one year. Upon his return to England, he wrote a book about Jamestown, and in it is the only mention of a first marriage for Pocahontas. Some 20th century Native American histories have repeated the claim.[3] He wrote that she was married to a "private captain named Kocoum".[6] There is no concrete record of any children from this union, though some oral histories refer to one, and nothing further was recorded about Kocoum.[3][4]

UPDATE: A wikipedia entry questions the existence of Kocoum:
Since 1614 is certainly when she [Pocahontas] married John Rolfe, and no other contemporary records even hint at any previous husband, it has accordingly been suggested that when Strachey wrote of the "private captaine called Kocoum" he was mistakenly referring to Rolfe himself, with the reference being later misunderstood as one of Powhatan's officers. In addition, the date of Strachey's original statement has been widely disputed by numerous authors [who?] attempting either to make the case, or refute, that Pocahontas had been previously married."[7] Given this, Kocoum has been detached as a first husband.

Subsequent claims were made in the late 20th century, citing "sacred oral tradition" that Kocoum and Pocahontas had a child named Ka-Okee. Some say this was a son; others say this was a daughter.

In 1613 Pocahontas was captured by one English Captain Argall for ransom, with help from a neighboring tribe, luring her onto an English ship.[8] Pocahontas was taken to Jamestown, then Henrico, and began learning more of the English culture. She converted to Christianity in 1614, was baptized with the name Rebecca, and with Powhatan's blessing, married English widower and tobacco planter John Rolfe in April of that year.[4] Pocahontas and John Rolfe had one child, a son named Thomas, born around 1615.[3] He is Pocahontas' only known child.

Pocahontas, now referred to as Lady Rebecca Rolfe, accompanied her husband to England in 1616 on a public relations tour on behalf of the Virginia Company, which included meeting King James I. They took up residence in rural Brentford for a time. It was there that Pocahontas encountered John Smith once more, and confronted him on the behaviors of his company in the colonies.[3][4]

In March 1617, the Rolfes decided to return to Virginia. Shortly after they began their return voyage, Rebecca became ill and the ship she was on put in at Gravesend, Kent, England. Rebecca died on shore and was buried under the chancel of St. George's Church on 21 March 1617. [1][9] John Rolfe returned to Virginia, while young Thomas stayed in England with family.[3]

Little else is known about Pocahontas for certain. Most that is told was written by others or passed down via oral history, and many families claim a connection to her, though far fewer than claim can prove it.

Her son Thomas was educated in England, but later returned to Virginia and became an important settler; many prominent Virginians claim to be his descendants.[10]

Sponsored Search by Ancestry.com
DNA
No known carriers of Pocahontas's DNA have taken a DNA test. 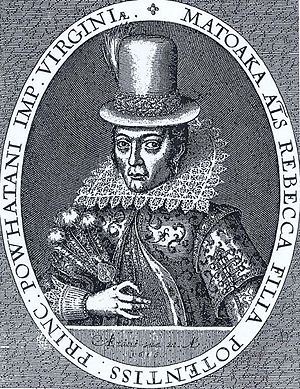 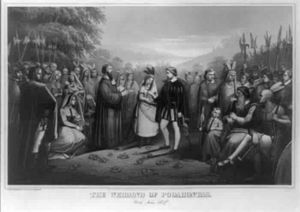 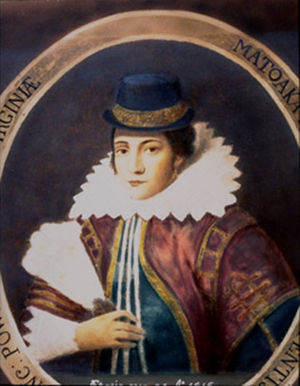 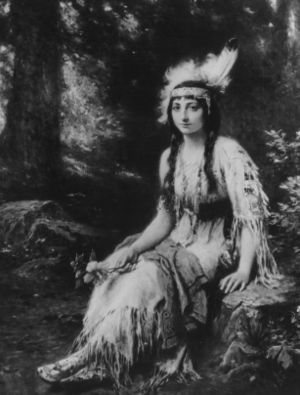 Jillaine Smith
I'm all for making this profile more accurate. But where are we lacking sourcing? My review of this seems to indicate most things are sourced. What do you want better cited and/or moved, Kathie?
posted Mar 05, 2020 by Jillaine Smith

LaQuita Holland
Can someone let me know how to add this profile to my family tree? She is my 11th grandmother through my father's side of the family. Thank you in advance
posted Feb 22, 2020 by LaQuita Holland

Jillaine Smith
LaQuita, you work your father's line back, generation by generation, sourcing each connection as you go, until you reach her only known son, Thomas Rolfe. Then he's connected as are you.
posted Feb 22, 2020 by Jillaine Smith

LaQuita Holland
Thank you for your help Jillaine. I tried this but it says something about being project protected(?) and no matter what I tried, it wouldn't let me add her.
posted Feb 25, 2020 by LaQuita Holland

Jillaine Smith
It is true that you cannot attach new profiles / relationships to project protected profiles. What profile are you trying to attach to Pocahontas?
posted Feb 25, 2020 by Jillaine Smith

Jillaine Smith
Powhatten-1 and Powhatan-3 appear to represent the same person because: Duplicate of Pocohontas found (thanks Mel).
posted Apr 08, 2019 by Jillaine Smith

Jeff Gentry
Thanks, Jilliane. I appreciate that feedback. Though I'm a long-time genealogist, I'm new to WikiTree so I'm still finding the boundaries. I don't want to step on anyone's toes. I guess the project protected notice does say "significant" changes.
posted Jan 18, 2019 by Jeff Gentry

Jillaine Smith
Done. (Btw, this is a minor change you could have done directly.)
posted Jan 18, 2019 by Jillaine Smith

Jeff Gentry
There is now a Category: St George's Church, Gravesend, Kent category (without the period). Please switch to it at your convenience. The other category will be deleted. Sorry for the inconvenience. I'm a big dumb American with the habit of putting periods after the abbreviation for "Saint".
posted Jan 18, 2019 by Jeff Gentry

Jeff Gentry
I actually create the category specifically for this purpose so that's why she's the only one. I'll go look for someone else buried there just so she has company. You are correct about the period. It should not be there. My bad. I'll go inquire with the cemetery group on how to correct that. Thanks to adding it.
posted Jan 18, 2019 by Jeff Gentry

Jillaine Smith
Done, BUT, she's the only one so categorized. Also, I think it's a badly spelled category. I don't think periods are used. I'm not familiar enough with category usage, much less cemetery category usage; Jeff, could you find out and fix the category? Thanks.
posted Jan 17, 2019 by Jillaine Smith

Pocahontas is 16 degrees from Donald Howard, 14 degrees from Julia Howe and 13 degrees from Henry VIII of England on our single family tree. Login to find your connection.