Sir Nicholas Poyntz (c.1528-85), was an English politician. He was born the eldest son of Sir Nicholas Poyntz, courtier and Knight of the Shire for Gloucestershire. He succeeded his father in 1566 and was knighted (KB) in 1559.

ask our community of genealogists a question.
Sponsored Search by Ancestry.com
DNA
No known carriers of Nicholas's DNA have taken a DNA test. 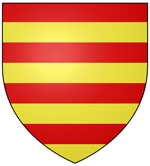