[send private message]
Profile last modified 2 Apr 2022 | Created 11 Sep 2010
This page has been accessed 7,105 times.
Multiple people may be conflated in this profile, i.e. information about different people may be combined and confused.

Francis Poythress "came to Virginia about 1633, and patented lands on James river, in that part of Charles City county now known as Prince George. He was burgess for Charles City county in 1645 and 1647, and for Northumberland county in 1649. He had the rank of captain. [Francis] married, and had a daughter who married Thomas Rolfe and a son Francis."[1]

Francis Poythress is a Qualifying Ancestor of the Jamestowne Society

The Francis Poythress who is a Jamestowne Qualifying Ancestor was Burgess for Charles City County and then Northumberland County.[2]

Information presented in this profile needs better sources. The dates and locations appear to be primarily supported by Ancestry sources: An Ancestry link is not a source & the sources from Ancestry that are cited are not considered reliable.[3]

Many profiles for France Poythress were merged. Some of the information appears to be for people other than the Francis Poythress born 12 July 1609 in Newent, Gloucestershire, England and died in Virginia in circa 1651. (From information in datafields as of 1 March 2019.)

For example, the text for this profile notes that he immigrated to Virginia in 1639, yet records for a Francis Poythress in Virginia exist prior to that (see Facts, below), which fits better with an imported bit of information that he immigrated in 1633.

A Francis Poythress was in Charles City County, Virginia by 16 July 1637, when "Francis Poythers" received a patent for land there that was "bounded on the West by Bayle’s Creek; and bounded on the East by the land of Captain Woodliffe."[11]

Sponsored Search by Ancestry.com
DNA
No known carriers of Francis's DNA have taken a DNA test. 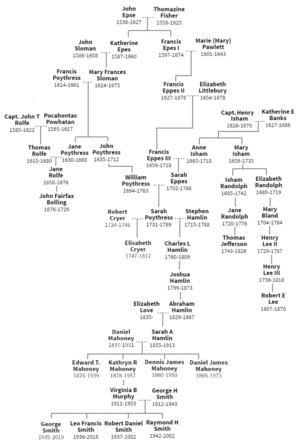 Malcolm Hoare
There is nothing to suggest that this Francis that was baptised in Newent, Gloucestershire, is in fact the same person who came to Virginia. In fact the baptismal entry states that his father was John., not Joshua.
posted Sep 23, 2020 by Malcolm Hoare

This means that Francis could not have been married to two different women who both died after he did.

Mary Sloman's profile has her born 1610, died 1675. So does the profile for Alice Payton, which calls her Mary.

Lots of text on Mary Sloman's profile, although not much proof. I found a couple of online trees that had an Alice Payton, but no sources. Could it be that the two profiles are actually intended to represent the same wife of Francis Poythress, but one proposing her maiden name as Sloman and one as Payton? If so, then maybe his wife's profile should have the LNAB "Unknown" with both possibilities addressed in the text of a single profile.

Liz (Noland) Shifflett
update - moved them to be children of Wynne-2 & proposed merges with the children attached to him already.

need sources for his children... but I'll be detaching the Wynne profiles:

https://en.wikipedia.org/wiki/Jane_Rolfe says her mother was not a Poythress (see text in profile... last entry under sources)

Liz (Noland) Shifflett
This discussion was interesting too:

Liz (Noland) Shifflett
Poythress-5 and Poythress-115 appear to represent the same person because: these were set as rejected but they appear to be intended to represent the same person, despite the different birth years (they're attached to the same mother & are both shown as died in Virginia, within a year of each other). If they're not intended to be the same person, please add notes about who's the son of Susan/who died c1650 in Virginia. Thanks!
posted Mar 01, 2019 by Liz (Noland) Shifflett

Liz (Noland) Shifflett
pages on http://www.tc.umn.edu/~... have gone away (some have moved, but most are available still from archive.org's WayBack Machine).