While at Harvard an accident deprived him of the use of one eye and the other was so injured he could make but partial use of it. And yet his courage and undaunted resolution enabled him to vanquish his difficulties and establish for himself the a brilliant reputation as one of the most brilliant historical writers.

On Mr. Prescott's 24th birthday, being the 4th of May 1820 he was married to Miss Susan Amory the daughter of Thomas C. Amory, Esquire a successful merchant of Boston who had died in 1812 and of Hannah R. Linzee. Susan had been born 1802. And she died 18 October 1869 in Massachusetts.[4]

Prescott, Arizona it is name after William Hickling Prescott

Prescott was founded in 1864 as the Territorial Capital of Arizona. Though three of the names originally proposed for Prescott were “Audubon”, “Goodwin City” and “Aztlan”, the name “Prescott” was chosen in honor of William Hickling Prescott, author of The History of the Conquest of Mexico. The Arizona Miner reported that the name was accepted because Prescott was “a good citizen, a true patriot, with industry, perseverance under difficulty, amiability of character and love of country.” 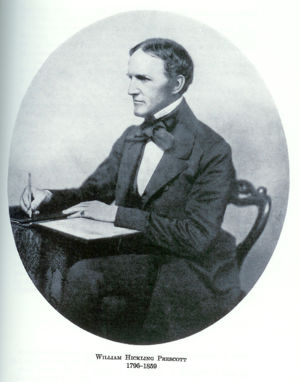