Giuseppe Profaci is born in Villabate, in Palermo province, on 2 October 1897.[1] He is suspected of already being involved in the Mafia in Sicily, where he served a year in a Palermo prison for theft.[2]

At least two sources indicate Joe Profaci immigrates from Sicily on 4 September 1921. One source names the ship, the SS Providence.[3] Another source indicates he is traveling with future boss Vincent Mangano and Vincent's brother and father.[4] A search on SteveMorse.org for a matching travel date finds the SS Providence departing Palermo on 24 August 1921 and arriving 4 September 1921 in New York. Appearing on the manifest are:

10. Gaetano Mangano, 39 (b. 1882), married, a merchant, leaves his wife Giovanna Giannone behind in Palermo. Destination NY, his brother in law Francesco Giannone, at 25 West Broadway (near World Trade Center site in Tribeca)

Joe settles first in Chicago, and then moves to New York in 1925, where he enters the olive oil import business, earning his nickname, "The Olive Oil King." In Mario Puzo’s books, Vito Corleone forms the "Genco Pura Olive Oil Company" in the 1920s. This detail is lifted right out of Profaci’s life.

Profaci's relationship with Mangano allows him to build relationships with other gang leaders in New York. Besides his legitimate operation in olive oil import, Profaci is also involved in extortion, bootlegging, counterfeiting, prostitution, loan sharking, narcotics trafficking, and gambling.[4]

The naturalization record for Joe Profaci available online has covered his name on the first page, but it's visible on the second. His immigration information matches the Providence: 4 September 1921. He was born 2 October 1897 in Villabate, Italy. He declared his intention to become a citizen on 12 March 1924 in Chicago. He has lived in the US continuously from his immigration in 1921 until 14 May 1926. Declaration of intention no. 154662 filed 7 June.

There are affidavits from Gerlando Casasa, a baker who lives at 115? Nostrand Av, and Arthur Massolo, an insurance agent who lives at 6219 10th Av, both in Brooklyn. They sign on 7 June 1927.

Profaci attends the Cleveland Mafia summit in 1928 and is arrested for bootlegging.[4]

Joe and Nina have six children, according to Wikipedia, including two sons: John Jr, and Frank. Frank joins his father's crime family, now known as the Colombo Family, while John Jr. enters legitimate business.[1] According to a profile of John Jr., he has three brothers in business with him at Colavita USA: Joseph, Anthony, and Robert.[10] Joe has at least one daughter, who marries a gangster from Detroit.[11]

Neutral in the Castellammarese War, Profaci is rewarded by Lucky Luciano with a seat on the Commission and head of one of the Five Families of New York.[4]

Olive oil is a rationed food in the latter years of World War II, when trade embargoes make it impossible to source legitimate, Italian olive oil. Demand skyrockets after the war.[4]

Profaci is one of dozens of high level Mafia members arrested at Apalachin in 1957.[4]

In 1959, a shipment of Sicilian oranges Joe Profaci is recorded discussing on the phone, turns out to be wax fruit covering 110 lbs of pure heroin.[4]

Profaci and Joe Bonanno are close friends. Their families visit each other often. Profaci’s niece Rosalie marries Salvatore Bonanno. His daughter marries the son of Vito Tocco, from Detroit.[4]

Profaci's territory is Long Island, where he has a home that was previously owned by former US President Theodore Roosevelt. [4]

By 1960, Profaci and Magliocco have held uncontested power for thirty years. Profaci's alliances with Bonanno, Magaddino, Detroit, and Mangano, are credited with Profaci's lengthy career.[3][2]

Profaci is a devout Catholic who makes many donations to Catholic charities.

He does not pay his taxes.

Profaci dies at the age of 64, of cancer, on 6 June 1962[12], six months after the death of Lucky Luciano. (The American Mafia History site gives his date of death on the seventh.)[4] A sculpture of St. Aloysius, bearing a cross and clutching a skull, stands atop Joe Profaci’s mausoleum.[13] 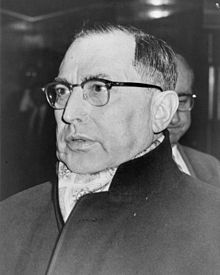