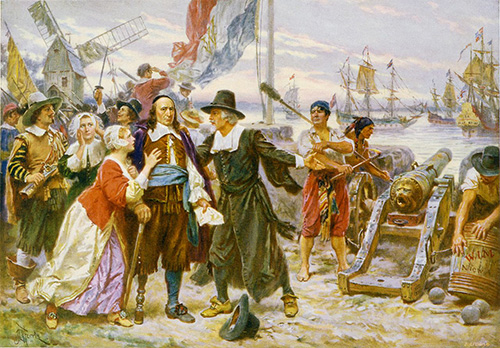 New Netherland was a 17th-century colony on the east coast of North America, controlled by the Dutch West India Company, located primarily (but not exclusively) in the Hudson River Valley (modern U.S. states of New York and New Jersey). Dutch presence began with Henry Hudson's 1609 voyage of exploration. Dutch control ended on 27 August 1664, when governor Peter Stuyvesant surrendered to invading English forces of the Duke of York (Articles of Capitulation), but the Dutch maintained significant autonomy in New Netherland until 24 Octpber 1674, when the Treaty of Westminster stipulated all Anglo-Dutch hostilities were to end. However, the Dutch-dominated culture of New Netherland continued to characterize the region (the New York Capital District, Hudson Valley, New York City, western Long Island and northern New Jersey) until well into the 19th century.

WikiTree's New Netherland Settlers Project seeks to support the development and maintenance of accurate genealogical information on the people of New Netherland, including settlers during the period of Dutch control (through 1674), descendants of those settlers (through 1776), and others who were a part of the Dutch-dominated New Netherland community.

Project participants need to be members of WikiTree. If you are not yet a WikiTree member, see Help: How to Use WikiTree to get started.

Are you interested in the New Netherland Settlers Project?

If you have any other questions, please see our FAQ page.

The Project definition of a New Netherland Settler is based on the criteria used by three lineage societies:

Note: Dutch nationality is not a requirement for being a New Netherland Settler. As a mercantile colony, immigrant arrivals to New Netherland included people from most every part of Europe and the Mediterranean region, as well as Africans (enslaved or free). Also, some of the indigenous people of the region (Native Americans) figured prominently in the history of the colony and are treated as New Netherland Settlers.

In addition, the Project includes the descendants of the Settlers born prior to 1776 and others who became a part of the New Netherland Community prior to 1700, including Huguenots who arrived after 1674.

Note: When we add the project account as a manager on a profile, it is to partner with current profile managers, never to replace them. Project members, project leadership, and other profile managers are expected to collaborate on maintaining and improving the quality of profiles included in the project.

The Naming Conventions of the New Netherland Settlers project apply the WikiTree-wide naming conventions and provide special guidance for dealing with the special challenges encountered with New Netherland names.

It is important to determine the surname and project protect the lowest-numbered WikiTree ID for that surname before merging tons of duplicate profiles, and this project has tons of duplicates for just about everybody. Each duplicate should then be merged directly into the project protected profile (PPP). (This is a technical issue - see "the redirect problem" for details and this G2G post for a great explanation.)

Naming conventions used by the New Netherland Settlers Project include:

The order of preference for the LNAB of New Netherland profiles:

As explored in "New Netherland Naming Systems and Customs" in the Jan 1995 issue of the NYGBR, though the British officially ended the use of patronymics in 1687, usage continued; therefore the New Netherland Settlers Project uses what is found in baptism and marriage records.

The first surname (or patronymic) that appears in church records for a person will be used for the Last Name at Birth (within reason). Other last names, including names later adopted by the family, are placed in the Other Last Names field where the names can be found through searches and profile creation forms.

The project does not use patronymics derived from baptism records that don't include a surname, as the Last Name at Birth. These patronymics should be added after the given name in the First Name field.

It is sometimes difficult to separate family names from other words used to describe or to disambiguate a person as people were sometimes described by location (toponymic), by profession or even nicknames they had somehow earned.

Consistent with customary practice in the Netherlands and the other European countries they came from, married women in New Netherland generally did not use their husbands' last names. This practice changed gradually over time. The Current Last Name for a married women should not be her husband's last name unless a contemporary record shows her using that name during her lifetime (or at her death). If published genealogies or other modern sources identify her with a husband's last name that she is not documented to have used, that name may be listed as an "Other Last Name."

The New Netherland Settlers Project has 3 project box templates to add to profiles for which the project is a profile manager. Please follow the links to learn more and to see examples.

If you believe that the profile needs to have the project as a profile manager but you are not sure of which template to use, place {{New Netherland Settler|needs=PPP}} in the biography and this will add the profile to a maintenance category where it can be reviewed.

The project also has two stickers: