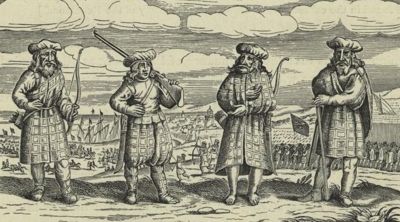 The project is a collaborative effort of Wikitree users to highlight those Scots that fought abroad between the 12th Century and the Acts of Union in 1707. Project Members can assume responsibility for periods, such as say the Alexandrian Crusade, Units, such as say The Douglas Regiment or the involvement of Clans, such as say Clan Mackay.

The purpose of this Project is to provide a forum for discussion regarding the many Scots that participated in Foreign Wars. The scope of the Project considers those Scots that served abroad in the armies of Scotland or foreign armies from the time of David I (1124-1153) (or roughly after the 2nd Crusade) until the period just after the Acts of Union in 1708 (actually the end of the British involvement in the War of the Spanish Succession around 1712) when Scotland's armies were incorporated into those of Great Britain.

The leader of this project is TBC

If you're interested in participating in this project, please do the following

1.Add the line [[Category:Scots in Foreign Service]] to the text area of your profile page. This will add you to the list of participants on the Category Page .

2.Add scots_in_foreign_service to your list of followed tags. That way you'll see all our discussions in your G2G Feed.

3.Add your name to the list below, along with a note about what you're working on in this project right now.

4. See our G2G join post, answer there with your interests, and we'll get you a badge.

Our major goal is to provide genealogical research into those Scots, and their families, that served abroad and any improvements you can make to the profiles of Scots in Foreign Service is much appreciated and welcome. Some specific goals we're working towards are:

At the moment the Project is working back from the War of the Spanish Succession although members should explore units, clans and periods that interest them.

These articles have commenced and their sponsor is identified. If you wish to participate or have a contribution please feel free to contact the sponsor.

As background, Scottish men have served in nearly every European Army either individually, such as in the Crusades, or as units during the entire period under study. Until the 15th Century these men generally acted as individuals or small units of Knight and his retainers, seeking fame and fortune in foreign armies. With a significant portion of Scottish nobility arriving from Flanders with David I, Scottish Foreign Policy was developed to support trade with the Low Countries. The Auld Alliance between France and Scotland included Flanders and the world's earliest standing units can be found in the Garde Écossaise; the Royal Guard to the King of France. Around 1550 it started to be the foreign policy for Scotland to create units and allow their service on foreign soil, often in preservation of trading interests. In the period between 1570 and 1640 the Privy Council of Scotland received numerous requests to recruit for service overseas generally to protect the interests of Protestant nations. It is unlikely that the Privy Council were aware of the true extent of recruiting. In 1572, when famine hit Edinburgh, the Privy Council provided a decree urging "all able-bodied men" to leave Edinburgh to go to the "wars in Flanders".

By 1620 Scotland's finest were in such high demand that Scotland resorted to commutation of prisoners sentence to meet the recruiting requirement. Units of varying sizes were sent to Bohemia and Denmark that consisted, to a large extent, of "the very worst of Scottish society - beggars, vagabonds and Border outlaws". In 1626 over 14,000 Scots left Scotland for service overseas. In the 20 years to 1640 a recorded 47,110 men would accept foreign service and thousands more were not recorded. Many of these would remain, inter-marry and have children.

Thus the Categories of the Project are structured to accommodate this, in roughly chronological order.

Scots on Crusade. Many of Scotland's Knights followed the Cross. This category will look to explore their involvement and includes those actions taken against the Moorish Emirates in support of Castile and in support of the Teutonic Knights at Danzig. Being managed by Doug Straiton.

Scots in French Service. Although informal cooperation dates to the days of Charlemagne, the Auld Alliance between France and Scotland, created by the treaty signed by John Balliol and Philip IV of France in 1295 against Edward I of England, is generally seen as the impetus for a standing force of Scots in French service. Since that date, Scots have been in service of France on a nearly continuous basis until the Garde Écossaise was disbanded in 1791. Being managed by Doug Straiton.

Scots in Low Countries service. Being managed by Doug Straiton.

Scots in Norwegian Service. In 1379 Haakon, as King of Norway and Denmark, created Sir Henry Sinclair of Roslin as Earl of Orkney, a title confirmed by Robert II. In 1469 James III married Margaret, daughter of Christian I, the King of Denmark, Sweden, and Norway, whose dowry was Orkney and Shetland. Since the days of Sinclair there have been Scots in the service of the Kings of Denmark and Norway although not always on a continuous basis and often against those Scots in service to Sweden. Being managed by Doug Straiton.

Scots in Swedish Service. Scotland provided soldiers to the Army of Sweden from 1563 when Eric XIV engaged the services of 2000 foot and horse and sought a significant number of ships and sailors. This category develops the story of these men, and the families that will eventually settle in Sweden and its dominions from this time until the time Sweden left the field of European warfare around the start of the 18th Century. Being managed by Doug Straiton.

Scots in Russian service. Being managed by Doug Straiton.

Scots in Prussian service. Being managed by Doug Straiton.

Scots in Austrian service. Being managed by Doug Straiton.

Scots in Italian service. Being managed by Doug Straiton.

Scots in Spanish service. Being managed by Doug Straiton.

Remember a lot of questions can be answered by referring to the help pages link at the top right of pages.