The War of 1812 Project is part of of the Military and War Project! 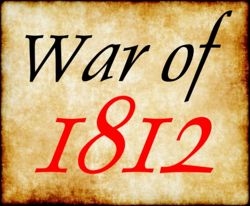 Projects cannot do your research for you. If you don't know where to start, please see: Help:How to Get Started with Genealogy

An infant United States of America stood up to the greatest naval power in the world, Great Britain! Although Europeans may consider it part of the Napoleonic Wars, the United States and Canada consider it as a separate war.

Restriction of U.S trade by Great Britain along with the Royal Navy’s impressment of American seamen combined with America’s desire to expand its territory.

This is the one and only time, in USA's history, the nation’s capital, Washington, D.C., was captured and burned in August 1814. The new nation suffered costly defeats at the hands of British, Canadian and Native American troops during the course of the War of 1812.

American military troops repulsed the British invasions in New York, Baltimore and New Orleans. These successes boosted the national confidence resulting in a new spirit of patriotism. It was after the Battle of Baltimore, and more specifically, after the shelling of Fort McHenry in Baltimore harbor, that Francis Scott Key wrote the poem that became the national anthem of the United States, "The Star-Spangled Banner."

The Treaty of Ghent, ratified on 17 February 1815, ended the war. In spite of the unresolved issues, some still going on today, many in the United States celebrated the War of 1812 as a “second war of independence,” beginning an era of partisan agreement and national pride.

This Project brings honor to those who served their respective nations, regardless of positions taken during the war. Each military member was called upon by their nation and fought with bravery and deserves to be remembered for the sacrifice each one experienced. Rest in Peace.

Our focus is on the War of 1812 military participants. Our purpose is two-fold:

We want to provide a space where someone who may only know that Great Grandpa served in the War of 1812 and provide them a direction/method to locate the specific unit he served with.

When you participate in this project you embrace the military member. You need to respect their sacrifice - regardless of the country served. It takes a special kind of person to serve on military projects: One that can look past their biases and focus on the service a military member provided.

You may also want to

Please add anything you would like to see as a subproject. We can discuss ideas on our google group and then post them on g2g.

The following projects and groups are likely to have some overlap with this one, so members of this project may be interested in them as well:

You can add American States or Territories, British, Canadian and Native American to the Sticker

Members and area of interest