Bernardo Provenzano is born in Corleone on 31 March 1933, the son of Angelo Provenzano and Giovanna Rigoglioso.[1] He is the third of seven brothers.[2]

Sometime after WWII (in his late teens) Bernardo joins the Corleonesi mafia under Michele Navarra, where he becomes close to Luciano Leggio, with whom he allies when Leggio goes to war against Navarra in the mid-1950s. Bernardo participates in the ambush that kills Navarra in 1858.[2]

From May 1963, he is on the run because of a failed hit on a man loyal to Navarra, and only secondarily because he (and two younger brothers, Simone and Salvatore) have been indicted.[1] Bernardo becomes second in command to Toto Riina when Leggio goes to prison in 1974. He runs the Corleonesi mob after Riina’s arrest in 1993, though at this time no one had officially seen Provenzano since ‘63.[2]

Extreme religiosity is one of Bernardo's odd traits, along with communicating with everyone through small handwritten notes. He is known by the nicknames "The Tractor" because of his extreme violence, and as "The Accountant" because of his relatively low-key character.[2]

Indicted in 1963, he is finally captured in his 70s, on 11 April 2006, near Corleone. The police are able to find the Mafia boss through a delivery of clean laundry sent by his family, to the farmhouse where he was hiding.[2]

Bernardo's death in jail at age 83 is reported on 13 July 2016 by the BBC.[4] Bernardo dies in the San Paolo Hospital in Milan, where he was held for the last two years of his life under maximum security, due to health problems including cancer and Parkinson's.[5]

Is Bernardo your relative? Please don't go away!

ask our community of genealogists a question.
Sponsored Search by Ancestry.com
DNA Connections
It may be possible to confirm family relationships with Bernardo by comparing test results with other carriers of his ancestors' Y-chromosome or mitochondrial DNA. However, there are no known yDNA or mtDNA test-takers in his direct paternal or maternal line. It is likely that these autosomal DNA test-takers will share DNA with Bernardo: 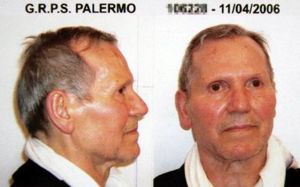