As a child, as well as through adulthood, Joseph Pulitzer was very eccentric and had always wanted to make a name for himself.

On his path to success he encountered many setbacks due to his frail health and to being foreign to the United States. Throughout his entire life he was ailed with illnesses such as asthma, diabetes, insomnia, chronic exhaustion, manic depression, and poor eyesight. Because of his health issues he was rejected from joining the Austrian Army, the British armed forces, and the French Foreign Legion. He was finally recruited into the Union Army, and eventually ended up in the United States where he struggled immensely due to his poor English and lack of money and prospects for work.

Joseph Pulitzer reached a turning point (defining moment) in his life when Carl Schurz hired him as a reporter for the German-language Westliche Post in St. Louis. This was the beginning of what would be Joseph Pulitzer’s climb to the top of the journalism industry and the spread of “yellow journalism.”

Pulitzer thrived in the journalism industry compared to his competitors because of his very determined, hardworking, and energetic personality.

He and his wife had seven children, but only five were alive when he died.

Joseph had asthma, eye problems eventually leading to blindness and died of a heart attack probably caused by diabetes. He was fourth of nine siblings, but six died before they were 17 (before 1861). It is not clear what happened to Helene (#8), but I've seen no evidence she left Hungary. Joseph and Albert (#6) came to America in the mid-1860s, and both lived until late middle age.

Although Pulitzer never had a specific mentor during his career as a journalist, he owes the start of his career to Carl Schurz who gave him his first job in the United States.

Joseph Pulitzer had a tremendous impact on why journalism is what it is today. He was the first to use a concept now called “yellow journalism,” which is the concept of using eye-catching headlines filled with gossip and scandal in place of typical news stories in order to sell more newspapers. Pulitzer’s newspapers were the first to contain cartoons, a sports section, and many other features that point towards entertainment rather than information. He used this technique to turn struggling newspapers that he had bought out into thriving ones. When he was 36 years old, he bought the New York World newspaper, which he turned into one of the most successful newspapers in New York.

Joseph Pulitzer died on October 29, 1911 in Charleston Harbor, South Carolina and is buried in Woodlawn Cemetery in the Bronx.

ask our community of genealogists a question.
Sponsored Search by Ancestry.com
DNA Connections
It may be possible to confirm family relationships with Joseph by comparing test results with other carriers of his Y-chromosome or his mother's mitochondrial DNA. However, there are no known yDNA or mtDNA test-takers in his direct paternal or maternal line. 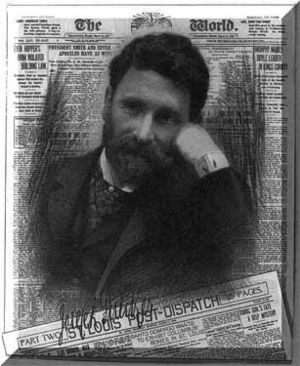 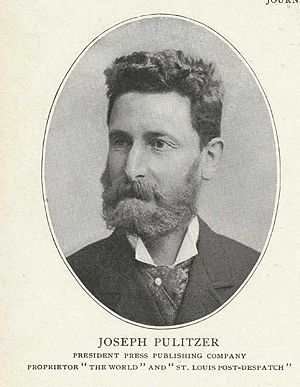 We plan on featuring Joseph alongside Noah Webster, the Example Profile of the Week, in the Connection finder on December 9. Between now and then is a good time to take a look at the sources and biography to see if there are updates and improvements that need made, especially those that will bring it up to WikiTree Style Guide standards. We know it's short notice, so don't fret too much. Just do what you can. A Team member will check on the profile Tuesday and make changes as necessary.