Frederick Punchard was born in England.

Frederick Punchard was born in Suffolk but lived most of his life at Kirkby Lonsdale, Westmorland, where he was employed as the Land Agent for the Underley Estate. The Westmorland Gazette newspaper printed a comprehensive obituary. See Frederick’s Suffolk family tree in "Records of an Unfortunate Family"[1].

THE LATE MR F. PUNCHARD We regret to learn of the death of Mr Frederick Punchard of Kirkby Lonsdale, which took place on Saturday evening last in his sixty-seventh year. For the long period of forty years Mr Punchard had occupied the position of agent on the Underley Hall estate, and under successive owners he maintained a well-bred and eminently successful herd of Shorthorns of the true Westmoreland dairy type. He had frequently acted as judge at the leading shows, and as recently as 1904 officiated in the cow and heifer ring at Park Royal, but although admittedly conscientious in his decisions, it was sometimes hinted that his taste having been mainly in the direction of the milking type, and his experience for many years having been practically restricted to dairy cattle, he was not quite sufficiently in touch with modern conditions to justify his selection as judge at the principal show of the year. It may be admitted that there was some justification for this view, yet very few occasions could be recalled in which his decisions were subjected to or deserved severe criticism. Mr Punchard was prominently identified with agriculture and stock-breeding in the north-western counties, and his death will be deeply deplored by numerous friends throughout the whole country. (https://www.britishnewspaperarchive.co.uk/viewer/bl/0000652/19060816/086/0004) Field - Saturday 21 July 1906

ask our community of genealogists a question.
Sponsored Search by Ancestry.com
DNA Connections
It may be possible to confirm family relationships with Frederick by comparing test results with other carriers of his Y-chromosome or his mother's mitochondrial DNA. However, there are no known yDNA or mtDNA test-takers in his direct paternal or maternal line. It is likely that these autosomal DNA test-takers will share some percentage of DNA with Frederick: 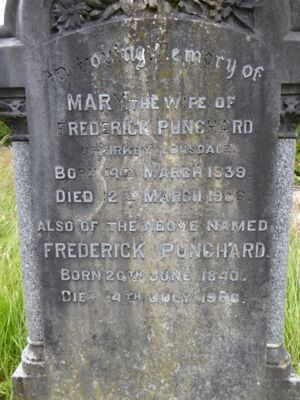