John Putnam was born before January 17, 1579/80 in Wingrave, Buckinghamshire, England, and died December 30, 1662 in Salem, Massachusetts.

He married PRISCILLA GOULD Abt. January 1610/11 in Wingrave, Buckinghamshire, England, daughter of RICHARD GOULD and ELIZABETH Deacon, who was most likely a daughter of Thomas and Martha Deacon of Corner Hall in Hemel Hempstead, Hertfordshire.

NOTE: Many researchers give Pricilla's maiden name as 'Deacon' not Gould.[1]

John and Priscilla had a total of seven children, all born in England. Tradition holds that John and his family came to America in 1634 to 1636, but no proof has yet been found as to exactly when he did come over.

Village records here in Aston Abbotts show that John Putnam was a church warden here in 1638 so he could not have left in 1634. I hope this information is useful to you. Kind regards Jill Wenble.

According to Eben Putnam (1891), John Putnam had seven children baptized at Aston Abbotts, [2]

He received a grant of land from Salem selectmen in 1640 that included land along Whipple's Brook from Putnam's mill on Sylvan street to the house in which Israel Putnam was born on the corner of Newbury and Maple St. The house was located by a well on present day Summer St.

In 1641, John was recorded as having swapped some Salem Village property for another piece. He lived the rest of his life in Salem Village, which is now the town of Danvers, Massachusetts. 100 acres of the land granted to John later passed to James and Jonathan Putnam (most likely his grandsons by son John, Jr.).[3]

On November 25, 1658, Zaccheus Gould of Topsfield deputed "John Putnam of Salem, the younger, his cousin" to be his attorney. (Essex Court Records, IV, 100). In an account book of John Gould, grandson of Zaccheus, born 1662, died 1724, is found an entry by him as follows, "Grandfather Gould lived in Buckinghamshire, and Grandfather Deacon in Hertfordshire, in Hempstead town in Corner Hall." In this same book are references to John Putnam, a contemporary, alluded to as "cousin." Jeremy Gould, a brother of Zaccheus, had a wife (Priscilla Grover) and was living in Aston Abbotts in 1631, but was in Rhode Island in 1638. Another brother of Zaccheus was John Gould, who lived in Bovington, and had a daughter Priscilla (who married a Grover and had in turn a daughter named after her) and also a neice Priscilla Ware. Neither of those were of suitable age to have married with John Putnam. (see Water's Gleanings, pg 1019) Both John Putnam and Zaccheus Gould named daughters "Phoebe." Cousin was a term in use in the early part of the 17th century to indicate nephew, and as there appears no opportunity for a Putnam-Gould marriage either way, the only alternative is to adopt the suggestion that John Putnam and Zacchues Gould had married sisters. (see pg 46, Genealogical Bulletin for 1903)

Occupation: husbandman and yeoman. John Putnam was well equipped for the work of founding a home in a country, both in ability and financial resources.

There is a entry in Lechford's Note Book under date of December 27, 1639, (22Feb., 1640, our reckoning), "For drawing Articles for Mr. Cradocke & Gould and Putnam (6s.)." Just what these articles related to is not revealed, but the reference is either to John Putnam or his eldest son Thomas. It was in 1640 that John Putnam settled in Salem. There is no record of his having been in any other part of New England prior to his appearence in Salem. His son Thomas first settled in Lynn, and his coming thought to have preceded his father's. In 1685/6, Nathaniel Putnam deposed that he was aged sixty-five years and had lived in Salem for forty-six years, and his brother John made a like statement, giving his age as fifty-eight years and his residence in Salem as about forty-five years (Ipswich records, Deeds, vol. 5,213), both of which statements agree with the date 1640 as that of the coming of their father. As it is not likely that the removal was effected in the winter season, either John arrived in the preceding year or else his son Thomas in the person referred to by Leachford.. There is no authority for the date 1634, sometimes given as that of the arrival of John Putnam, other than family tradition, probably originating with Deacon Edward Putnam who left a brief genealogy of the family compiled in 1733. In this same record is found the following account of the death of John Putnam, "He ate his supper, went to prayer with his family and died before he went to sleep."

Grants of land, were made by the town of Salem to John Putnam and to his sons on their account. The first grant is not of record, and the land so granted was not occupied by him. The earliest recorded grant, which was that on which he established his homestead, was 100 acres, 20-11 mo., 1640, or January 1641, new style. On that date, a meeting, there being present, Mr. Endecott, Mr. Hathorne, John Woodbury, Jeffry Massy, the selectmen, there was "Graunted to John Putnam one hundred acres of land at the head of Mr. Skelton's Farme between it and Elias Stilemen the elder his Farme, if there be an hundred acres of it. And it is in exchange of one hundred acres weh was graunted to the said John Putnam formerly & if it fall out that there be not such there then to be made up neere Lieutenant Davenport's hill to be layed out by the towne. And tenne acres of meadow in the meadow called the pine meadow if it be not there formerly graunted to others." There was also "Graunted Fiftie acres of land unto Thomas Putnam and Five acres of meadow both to be layed out by the towne."

At a meeting of the selectmen, 17-3 mo., 1652, "There being formerlie graunted unto John Putnam Sen' 50 acres of land and complaint being made that the said land laid out to him is not soe much it is ordered that the layers out of the land shall make up what the said land shall want of his grant in land lying between his sonne Nathaniells land and Richard Huchisson."[4]

At a general town meeting held the 7th day of the 5th month 1644 it was ordered "that twoe be appointed every Lords day to walk forth in the time of Gods worshippe, to take notice of such as either lye about the meeting house without attending to the word or ordinances, or that lye at home or in the fields, without giving good account thereof, and to take the names of such persons & to present them to the Magistrate, whereby they may be accordingly proceeded against. Seventeen men were appointed, John Putnam and John Hathorne were appointed for the ninth day. All the men were of prominence and to whom a perusal of the records shows that the town people looked with respect.

The deeds on record are from 14 Feb. 1652 until 31 Oct. 1662. The earliest is a grant of land from Ralph Fogg consisting of: "a farme four score acres lying between old father Putnam's farme and Daniel Reies and more than eight acres near the house which John Hathorne built."[5] On 2 Jan. 1653 he gave his son Nathaniel one half of his lands and on the next day he gave Thomas the other half of his lands.[6]

In 1653 he divided his lands between his sons Thomas and Nathaniel, having evidently already granted his homestead to his younger son, John. In deeds John is described as both husbandman and yeoman. He was a man of substance and probably of much education as his contemporaries, but neither seeking or desiring public office.

In an old deed dated 1658 John Putnam (probably the younger) deeds a part of this land to Henry Kenny. Perhaps it was here that John built a house and brick kiln and that this is the first grant spoken of above.

John and his three sons gradually built up their holdings so that John, alone, by the time of his death in 1662, owned 800 acres.

John Putnam Sr. died suddenly in Salem Village, now Danvers, 30 December, 1662, aged about eighty years. The following account of John's death was written in 1733 by his grandson Edward: "He ate his supper, went to prayer with his family and died before he went to sleep". 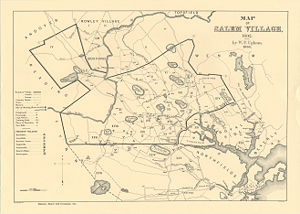 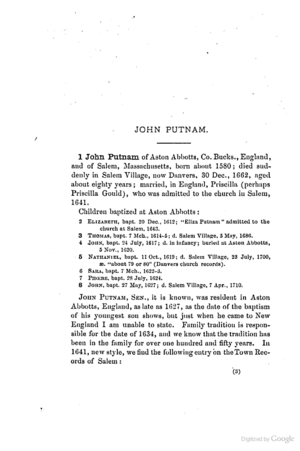 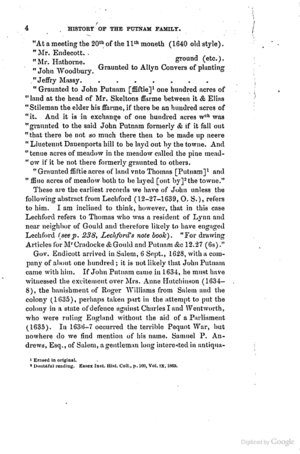 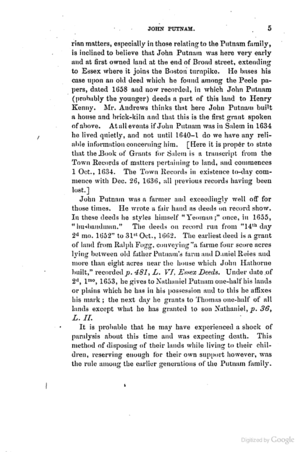 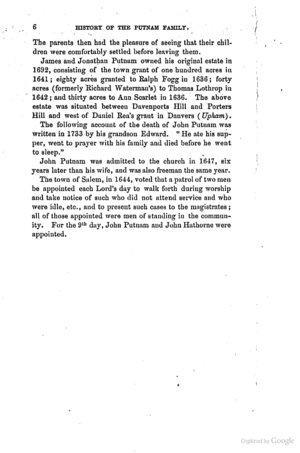 Leave a message for others who see this profile.
There are no comments yet.
Login to post a comment.
B. J. Jamieson
In the paragraph that starts "In 1641, John was recorded as having swapped some Salem Village" ~ is the John Putnam referred to actually John Putnam, Jr.? He had sons named James and Jonathan, while his father John Putnam didn't.

There's a second reference to James and Jonathan in the second to last paragraph under biography, as well. If the grandsons are being referred to, should that be made clear?

Scott Carles
B.J. Thank you for your support of WikiTree. I have made the edit and added a source for same - the source doesn't actually identify them as grandsons, but I believe you are correct.

I was pretty sure they weren't sons of John Sr. but keeping track of all the John Putnams can be a bit of a task, so I wanted to make sure others saw the same reading of it.

Scott Carles
We appreciate your input! The biography is in desperate need of work as large portions are plagiarized. I'm doing a bit of pruning at the moment.
posted Oct 20, 2021 by Scott Carles
GeneJ X
Might the lineage in "Possible Ancestry" be reduced a lineage line? Ala. something like ...

Jillaine Smith
Image fixed. That image upload was done by a former wikitree member who loved to attach the covers of various publications to all profiles that were mentioned in that publication. We're slowly but surely removing those. Thanks, Julie, for identifying the actually person. It's now only attached to his profile.
posted Dec 03, 2019 by Jillaine Smith

Julie Kelts
The illustration used as the primary image here is not John Putnam, it is Israel Putnam. The illustration appears in the book, labeled, following page 88 (original pagination; image 184 of 517 in the archive.org PDF).
posted Dec 03, 2019 by Julie Kelts

Jack Wise
Putnam-37 and Putnman-3 appear to represent the same person because: Everything appears to match.
posted Oct 26, 2018 by Jack Wise
Joe Cochoit
Beryl, see the notes I put on her page. We need evidence that her LNAB was Putnam. Also, the John Putnam baptizing children at Great Missenden is not the same John Putnam who was baptizing children at Aston Abbotts.
posted Sep 25, 2018 by Joe Cochoit

Beryl Meehan
I've located the bp for dau Marie, added it to her profile which proves she was John's dau. I also see a bp for a Mary whose father was a Mark Putnam, entered that note on Marie's profile and comment ...

attaching Marie (not Mary) to her father John today.

Jillaine Smith
The following information was sent to me via private message (not sure why); I paste it here in case it is of use to someone:

The Putmans are one family profiled in The Loyalists of MA and the other side of the American Revolution page 378, James Henry Stark. Boston 1910. https://archive.org/details/loyalistsofmassa00staruoft

A history of the Putnam family in England and America by Putnam, Eben, 1868-1933, published 1891 Salem MA https://archive.org/details/ahistoryputnamf01putngoog

posted Nov 04, 2016 by Jillaine Smith
Joseph Putnam
My branch where Patriots. Never heard of a Putnam being anything else. Intressting can you prove his connection?
posted Aug 22, 2021 by Joseph Putnam