Relationship with Friedel Dunbar with children

Actor. He had a career spanning over sixty years, with appearances in more than 150 motion pictures. He was awarded two Academy Awards for Best Actor in a Supporting Role - one for "Viva Zapata" (1952) and one for "Lust for Life" (1957), and was nominated twice for Best Actor in a Leading Role - "Wild is the Wind" (1957) and "Alex Zorbas" (1964). Quinn appeared in many movies which today are considered classics such as "Zorba the Greek" and "Lawrence of Arabia." He received widespread respect for his artwork which he pursued during film breaks on location and between films. His vast creations consist of drawings, paintings and sculptures both in wood and bronze mostly done in a Mexican abstract mode. During his lifetime, he would hold his own shows and each time they would result in a sellout while commanding pricey amounts. His training came from High School shop classes, but he was mainly self-taught. As an author, Quinn penned two autobiographies - "The Original Sin: A Self Portrait", published in 1972, and One Man Tango", published in 1995, co-authored with Daniel Paisner. His childhood was spent growing up on Hollywood's doorstep after arriving in Los Angeles, California at age 4 from Mexico with his immigrant parents. The family would reside in the various neighborhoods surrounding downtown Los Angeles, mainly Echo Park and Boyle Heights. After his father was killed when Quinn was 10 years old, he would show his ability for the arts by first creating a wooden grave marker and later sculpt a permanent replacement from marble. The tragedy forced him to go to work at a young age and help support the family, which led him to devise many ways which would ultimately enhance or lead to a show business and art career. He worked as a slaughterhouse worker, through his budding art career, he had access to Selznick International studios and when crossing the paths of various actors had the ability to quick sketch them and many times received cash from the subject. He became a street corner preacher garnering donations while playing in the band at Amee Semple McPherson's Foursquare church in Echo Park. He not only entered dance contests and won, but created the statues and sold them to the promoters which were used as prizes. He attended downtown schools at Polytechnic and Belmont High School. Personal creativity and dexterity earned him a prize in statewide competition at age eleven for his sculpture of Abe Lincoln. His senior year saw him awarded a scholarship to study architecture with Frank Lloyd Wright, the result of his architecture sketches and drawings. At age twenty-one he took acting lessons from Michael Chekhov, culminating in parts as an extra in a number of B-grade movies and his first credited acting debut in the movie "The Plainsman" (1936). His Latin look would be beneficial during his acting career. Quinn would became a prolific ethnic character: Filipino soldier, Libyan guerrilla, Spanish matador, various American Indians, Chinese warrior, Basque guide, Colombian bandit and a long list of Italians both native and American. In the 1980's he was absent from the movie scene but revived the defunct Broadway play "Zorba" and at age 67 took it on a successful four-year national tour. His health began to fail in 1990 and coronary bypass surgery was done, followed by hospitalization in 1996 when a lung tumor was detected. His final film role was in "Avenging Angelo" (2001). Upon completion, he was admitted to Brigham & Women's Hospital, Boston, Massachusetts and would die three weeks later of pneumonia and respiratory failure at age 86. Aware of his impending death, he had asked Bristol, Rhode Island city officials for a waiver to permit burial on his estate and the request was granted. His interment and graveside service was private and consisted of some forty family members and close friends. After his burial, a public memorial service was held at the Bristol Baptist Church with his immediate family present. He received many other awards and honors in addition to his Academy Awards and nominations: Best Foreign Actor for "Lawrence of Arabia" (1962) from the British Academy Awards, Golden Globe awards for Best Motion Picture Actor - Drama - for "Alexis Zorbas" (1964) and Best Motion Picture Actor - Musical/Comedy for "The Secret of Santa Vittoria" (1969), and Best Performance by an Actor in a Supporting Role in a Series, Mini-Series or Motion Picture Made for Television for "Gotti" (1996). He has a star on the Hollywood Walk of Fame for Motion Pictures as well as prints in the forecourt of Graumans Chinese Theater. The Anthony Quinn Library is today located at the exact place of a childhood home on what today is Caesar Chavez Avenue. A major branch of the Los Angeles Library system, it houses the Anthony Quinn Collection consisting of thousands of photographs, scrapbooks, scripts and other memorabilia relating to the life of the actor.

ask our community of genealogists a question.
Sponsored Search by Ancestry.com
DNA
No known carriers of Anthony's DNA have taken a DNA test. 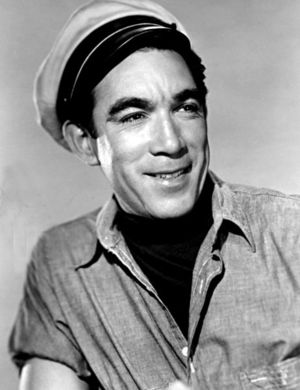 Teresa Downey
Rudolfo-1 and Quinn Oaxaca-1 appear to represent the same person because: Rodolfo is middle name per wikipedia. Please merge these duplicates. Thank you
posted Feb 25, 2020 by Teresa Downey