George Wythe Randolph was Thomas Jefferson's youngest grandson by his daughter Martha (Jefferson) and Thomas Mann Randolph Jnr and named in honour of George Wythe, a signer of the Declaration of Independence

Was the Confederate States War Secretary at the time of the American Civil War., in office 24 Mar 1862 - 15 Nov 1862 under President Jefferson Davis. who he later came into conflict with over the Confederacy's western and southern defences.

Due to ill-health he resigned 17 Nov 1862, and took his family to Europe, staying in England and France, returning to Virginia abt 1866.

He died Mar 1867 from TB at Edge Hill Plantation and is buried in the Jeffferson Family graveyard.

His image is on the Confederate $100 bill.

from Biography at Wikipedia: George_Wythe_Randolph

ask our community of genealogists a question.
Sponsored Search by Ancestry.com
DNA Connections
It may be possible to confirm family relationships with George by comparing test results with other carriers of his ancestors' Y-chromosome or mitochondrial DNA. However, there are no known yDNA test-takers in his direct paternal line. Mitochondrial DNA test-takers in the direct maternal line: 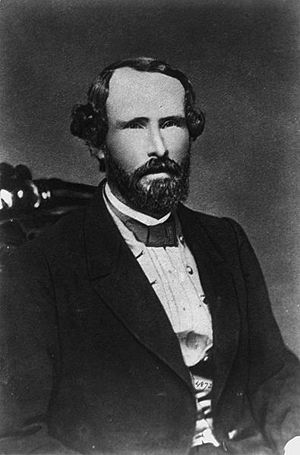