William Randolph was a US Southern Colonist.

William Randolph, son of Richard Randolph, Gent., and Elizabeth Ryland, daughter of John Ryland, Gent., was baptized 7 November 1650 at Moreton Morrell, Warwickshire, England.[1][2] William was the second son[2] of the eight Randolph children,[1] seven who were baptized in Moreton Morrell between 1647 and 1657.[3]

The last Randolph family record at Moreton Morrell was the birth of Richard and Elizabeth's daughter, Margaret, on 25 February 1656.[3] The "Randolphs were high Loialists [sic] in the Civil Wars" (1642-1651), their family being "entirely broken and dispersed".[3] Sometime during the interregnum (1649-1660), William's family removed to Dublin, where his father died[1][2] (in 1671 or 1678). Perhaps this means William spent some of his formative years in Ireland.

William had immigrated to Virginia by 1672,[1] arriving before 12 February 1672, when he appears in the record as a witness to a land transaction between Henry Randolph and William Rookins.[3] He likely lived at Jamestown during his first years in the colony. Randolph appears to have arrived in the province with little capital and few transatlantic connections. It is thought that he may have spent the earliest part of life in Virginia building houses and barns, but by 1674 he had enough wealth to bring over twelve indentured servants[2] and, on 1 October 1674, William received his first patent for 591 acres on Swift Creek for transporting the twelve to the Colony.[3] This was the first of his many land patents.

In the Colony of Virginia, William became planter and a merchant.[1] Virginia's economy was centered around tobacco, grown within the English mercantile system for export to markets in Britain and Europe. Between 1674 and 1697, William imported 72 servants and 69 slaves for which he collected patents for more than 7,000 acres.

In 1676, a Virginia colonist, Nathaniel Bacon, led a revolt against the colonial government. Although William remained neutral during Bacon's Rebellion, he maintained his friendships with William Byrd and Capt. Henry Isham (his future father-in-law), who were both Baconites. On Bacon's defeat, William was able to purchase the estates that were forfeited by the rebels, including Turkey Island in 1684 and two others in 1698.[2] Although he was able to acquire a great deal of land as a result of the rebellion, William had also sustained substantial losses during the fighting. His "account of the losses of diverse particulars sustained by William Randolph" can be found in Henrico County Records (Vol. 1677-1692, p.30).[3]

On 1 Apr 1678, William sold his land on Swift Creek to William Bevin and, on 18 February 1679, he made his first of several purchases of land on the Henrico County, Turkey Island tract: 150 acres, recorded in April 1680.[3] William and his family settled there,[1] near the head of the tidewater on the James River, where he built the family home. This land had been settled for decades, and was held by several owners, from whom he purchased over a period of about thirty years, until he owned the entire plantation of 1,000 acres "more or less".[3]

"Brick gate posts are at the entrance to Turkey Island, ancestral seat of the Randolph family. The present house, near the James, is relatively modern. Within a walled enclosure are ironstone table tombs, that of the immigrant bearing the Randolph arms. The plantation, so named for an island nearby where the first explorers of the river found many wild turkeys, was owned in 1676 by Colonel James Crews, who was hanged for participating with his neighbor, Bacon, in the rebellion. In 1684 the land was sold to William Randolph."[6]

William was also a ship-owner, whose ships sailed frequently to England,[5] carrying produce and tobacco from his plantations to be sold through his agent there, Micajah Perry.[2] These ships would also carry goods back to Virginia.

William served in the Virginia militia and was referred to as Captain in 1680, using that title until 1698, when he was called Lieutenant Colonel[3] of the Henrico County militia.[10] In 1705 tax records, he is referred to as Colonel.[11]

At some point in his long career, William had also served as county sheriff and coroner and had held the position of escheator-general, which helped him in his accumulation of more than 10,000 acres of tobacco land.[2]

William was a friend of William Byrd (1652-1704) and, after Byrd's death, he served as an advisor to Byrd’s sons during their political careers.[2]

William Randolph and Mary Isham, daughter of Capt. Henry Isham, Gent., were married[2] before 13 November 1678.[1][12] They are sometimes referred to as the "Adam and Eve of Virginia" because of their numerous and illustrious progeny. They had nine surviving children:[2]

William and Mary also had a daughter, Elizabeth, perhaps their first-born child, who died in infancy on 17 Apr 1685.[3]

Over the years, William acquired other property by purchase, headright, marital interest and land grant. In addition to Turkey Island, William procured the following:

William Randolph also owned a considerable number of slaves. Around 1675, Governor Berkeley reported the population of the colony as 40,000, with 4,000 indentured servants and 2,000 slaves. But as the supply of indentured servants declined late in the 17th century, the planters turned to slaves for work in the labor-intensive tobacco cultivation. It has been difficult to determine the acreage or number of slaves he owned at his death.

William is buried at the Randolph Family Cemetery in Henrico County, his grave is inscribed as follows:[14]

The portion of William's Find A Grave memorial that describes his burial place is unsourced, stating that William is buried at the "Randolph Family Cemetery, Presque Isle" in Henrico County which is located "on the South-West side of the old Turkey Island Plantation. The Turkey Island Plantation is NOT on Turkey Island, but across the James River, north of Turkey Island. The family plot is now on private property and the owner does not allow people to visit the walled in cemetery (according to G. Parsons)."[15]

The will of William Randolph was dated 6 March 1711 and proved 5 June 1713 (Henrico Co. Probate Court, Part I, 1710-1714, pages 215-218).[13] It directed that the following children were to be given lands to be divided among them: Isham, Thomas, Richard, John and Edward.[3][13] His son William was named in the will, noting that he had already received his portion of his father's lands.[13] And, although William's second son, Henry, was named as one of the executors of his father's will, he was not a legatee as his father had transferred "Longfield" to Henry before he died.[3]

Gateway Ancestor William Randolph is in a trail to Surety Baron William Malet that was badged by the Magna Carta Project in January 2015. In November 2019, J.M. Sanders joined the project as Gateway Guardian for this profile. The profile was re-reviewed/updated to meet current standards by Traci Thiessen November 12, 2019. See Base Camp for more information about Magna Carta trails. See the project's glossary for project-specific terms, such as a "badged trail" and "Gateway Guardian". ~ Noland-165 22:01, 12 November 2019 (UTC)

William Randolph is a descendant of the following Magna Carta Barons:

(and most of the others)

Sponsored Search by Ancestry.com
DNA Connections
It may be possible to confirm family relationships with William by comparing test results with other carriers of his Y-chromosome or his mother's mitochondrial DNA. However, there are no known yDNA or mtDNA test-takers in his direct paternal or maternal line. It is likely that these autosomal DNA test-takers will share DNA with William: 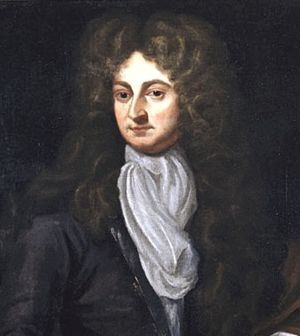 Grave slab for William Randolph I 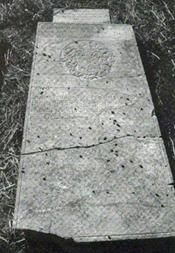 Traci Thiessen
A digital image of the 1711 will of William Randolph is available with membership at Virginia Pioneers. I can't find a free copy online. If someone with a membership could transcribe it, it would be very much appreciated!
posted Nov 12, 2019 by Traci Thiessen

FYI: I'm going to take on the review and revision of this profile to ensure it meets Magna Carta Project standards. Thanks.

Liz (Noland) Shifflett
Thanks Vicki! It's a start.

I did a bit more. Still needs a lot more.

Robin Lee
After leaving notes with sources almost two months ago, I have removed the unproven children from this family.
posted Sep 04, 2019 by Robin Lee

Liz (Noland) Shifflett
ps - The Wikipedia article for Richard Bland shows his wife Elizabeth Randolph as born 1680 and died 1720, but that info is not footnoted with a source: https://en.m.wikipedia.org/wiki/Richard_Bland

The article on their son Richard posted by the Encyclopedia of Virginia says he was orphaned in 1720: https://www.encyclopediavirginia.org/Bland_Richard_1710-1776

Liz (Noland) Shifflett
I checked Richarson's Royal Ancestry, IV:458 RANDOLPH 24, which has marriage to Mary Isham as "before 13 Nov. 1678" (daughter of Henry, "of Henrico County", but Richardson doesn't say they married there).

There are two profiles attached for William's daughter Elizabeth, whom Richardson shows as m Richard Bland. There seems to be a deal of confusion - the profile for Elizabeth (Randolph) Bland has her born 1685 (no conflict) and says she died 22 Jan. 1720. However the bio includes information about Elizabeth m Theodorick Carter should probably be moved to the profile for Elizabeth m Carter (born 1677, which is causing causing the error). Richardson lists only Elizabeth m Bland and Mary m Stith as daughters (but no additional information).

Robin Lee
I removed the marriage date shown, as it would create an error of a child born before marriage.
posted Jul 13, 2019 by Robin Lee

William is 21 degrees from Ludwig Kraayenbrink, 11 degrees from Henry VIII of England and 22 degrees from Ferdinand von Zeppelin on our single family tree. Login to find your connection.